Health officials logged 916 new COVID-19 cases on Monday, which is also the lowest number of new infections in a single day since Feb. 17.

The last time Ontario reported fewer than 1,000 COVID-19 cases was on March 6.

With 18,226 tests completed in the previous day, the positivity rate stands at 4.3 per cent.

The province also deemed 1,707 more cases of the disease to be resolved as of Monday, bringing Ontario's number of recovered patients up to 510,135.

The total number of lab-confirmed cases in Ontario to 531,459 including deaths and recoveries.

As of Monday, there are 731 people hospitalized with COVID-19. Of those patients, 617 are being treated in intensive care units and 382 are breathing with the assistance of a ventilator.

Most of the new cases reported on Monday are concentrated in hot spot regions in the Greater Toronto Area. Officials reported 226 new cases in Toronto, 165 in Peel Region, 85 in York Region, 67 in Durham Region, and 52 in Hamilton.

Chief Medical Officer of Health Dr. David Williams has previously said that he would like to see case counts “well below 1,000” before the economy is gradually reopened but on Tuesday he said that the actual number he is targeting is actually “closer to 550-600 new cases a day."

Officials also recorded an additional eight cases of the P.1. strain and one of the B.1.351 mutation. 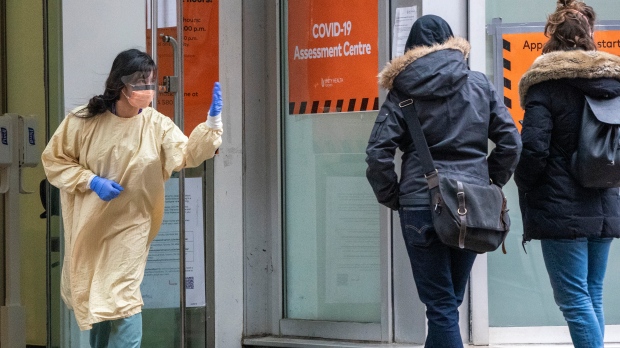 The province reports that 706,832 people in Ontario have received both doses of the COVID-19 vaccine and are now considered immunized against the disease.

In the last 24-hour period, officials said that 97,747 doses of the vaccine were administered to residents.

Since COVID-19 vaccines starting rolling out in Ontario, 9,082,025 people have received at least one dose.

The Ford government said last week that every eligible Ontarian will be able to receive both doses by the end of summer.