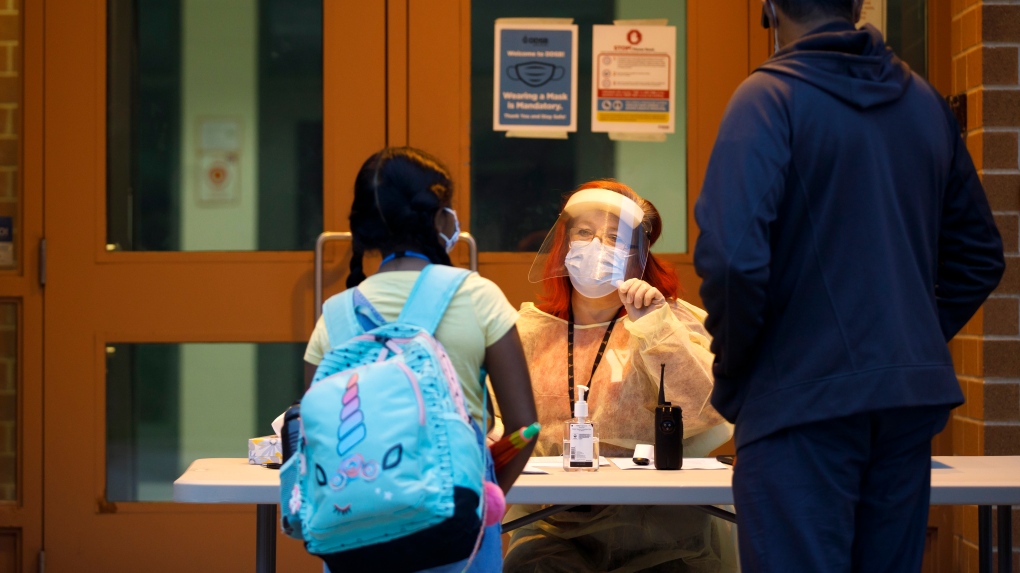 Judi Rigotti pre-screens a student for her before class programming at Elizabeth B. Phin Public School in Pickering, Ont., Tuesday, Sept. 8, 2020. THE CANADIAN PRESS/Cole Burston

The 615 new cases reported Monday morning represent an increase over Sunday’s total when the province reported 566 new cases of the disease.

Five more deaths related to COVID-19 were recorded over the last 24-hour period as well as 541 more infections the province now considers to be resolved.

The new cases were reported as walk-ins at the province's 153 COVID-19 assessment centres were discontinued to make way for scheduled appointments.

The Ministry of Health's daily epidemiologic summary shows that 282 of the new cases were reported in people between the ages of 20 and 39. That age group leads the province in lab-confirmed COVID-19 infections at 19,298 cases.

Another 166 cases were reported in people between the ages of 40 and 59.

Twenty new cases were reported in people 80 years of age and older.

Most of the new cases reported Monday are in Toronto, Peel Region and Ottawa.

Toronto accounts for the lion’s share of the cases with 289 new infections recorded. Peel Region logged another 88 cases and Ottawa added 81.

There are currently 176 patients in an Ontario hospital with COVID-19 symptoms, though approximately 35 hospitals did not report patient data over the weekend.

Of those 176 patients, 43 are being treated in an intensive care unit, 26 of which are breathing with the assistance of a ventilator.

The province has processed more than 4.1 million tests for the disease since the start of the pandemic.

There are 68,006 tests currently under investigation.