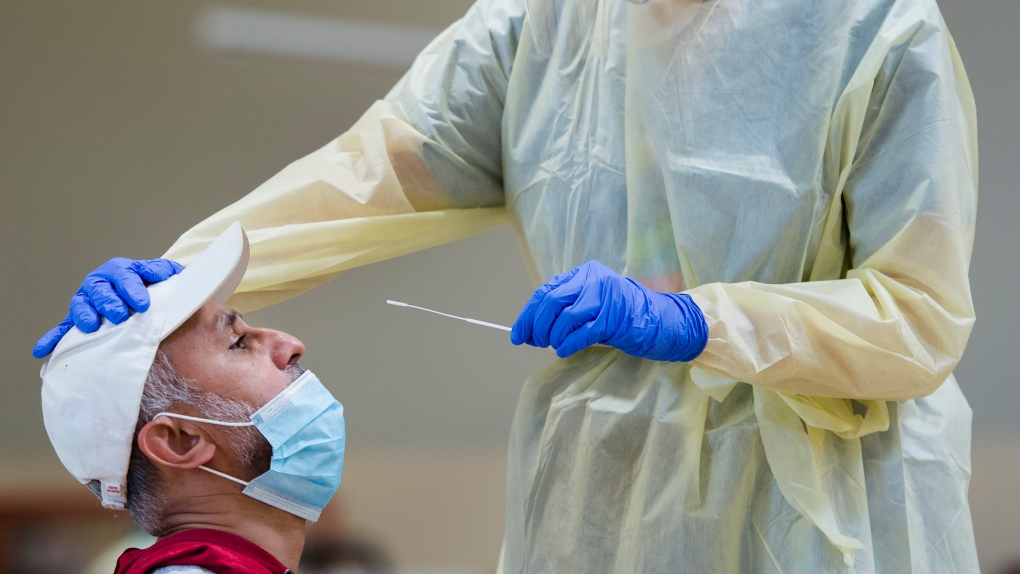 Friaaz Azeez gets tested for COVID-19 from a health care worker at a pop-up testing centre at the Islamic Institute of Toronto during the COVID-19 pandemic in Scarborough, Ont., on Friday, May 29, 2020. (The Canadian Press/Nathan Denette)

TORONTO -- The number of new cases of COVID-19 in Ontario has dropped once again following several days of relatively high numbers.

Ontario health officials reported 103 new infections on Thursday morning, bringing the total of lab-confirmed cases in the province to 38,210.

Also, no deaths were recorded in the last 24-hour period.

The new cases added Thursday, which represent a growth rate of 0.3 per cent, come as the province processed 26,001 tests for the novel coronavirus yesterday.

"We continue to lead the country in daily testing," Minister of Health Christine Elliott said in a tweet published this morning.

So far, the province has completed more than 1.9 million tests for the virus since the beginning of the pandemic.

At the same time, the number of patients who have recovered from COVID-19 now stands at 33,963, with 151 more resolved cases reported since Wednesday.

"There are 48 fewer active cases in the province," Elliott said.

Of the province’s 34 public health units, most recorded no new cases of COVID-19.

The majority of the new infections were reported in Toronto, Peel Region and Windsor-Essex, all areas excluded from moving into the next stage of the province’s reopening plan due to stubbornly high case numbers.

After weeks of steadily falling, hospitalizations for COVID-19 have increased with more than 50 patients admitted for treatment since Sunday.

Of the 154 patients in Ontario hospitals with the disease, 35 are being treated in an intensive care unit, 21 of which are on a ventilator.