TORONTO -- Ontario Premier Doug Ford is warning post-secondary students not to party when universities and colleges reopen in the fall amid the COVID-19 pandemic.

The premier made the comments during a news conference on Friday, where he shared a chart comparing Ontario’s case numbers to other regions in North America with similar populations.

Ford praised Ontario residents and workers for helping curb the spread of the disease in comparison to the other regions, but also warned students to not become lax in following health protocols.

“I stress to our youth … When you're going back to college or university, I know the first few weeks its party party party, but guys, do me a favor, no partying,” he said.

“Just do me that one favor, that's all I ask. Hang in there. You're going to have later in the summer to party all you want.”

Ford had previously condemned parties taking place illegally in the Greater Toronto Area, saying those who take part in the events are putting people’s lives at risk.

“Just don’t go to a party. Simple. You are hurting people by doing this,” he said. “Go back to the golden rule. Wear a mask and if you don’t have a mask keep two metres. I just ask people to hold off on these parties. I don’t know why everyone wants to party so badly."

Universities and colleges across the province say they are working to ensure that frosh and orientation weeks are not cancelled altogether amid the pandemic. Many of the institutions have launched virtual events to help new and returning students settle in.

All of Ontario is currently in Stage 3 of the province’s reopening plan, which allows a maximum of 50 people to gather indoors and 100 people outdoors so long as physical distancing measures are met with those outside of one's social circle. Social circles in Ontario are currently capped at 10 people.

For several weeks now, most of the new infections reported in Ontario have involved people between the ages of 20 and 39.

The chart presented on Friday painted a comparatively positive picture for Ontario, which has a total of 41,935 cases of COVID-19 amid a population of just over 14.7 million people. 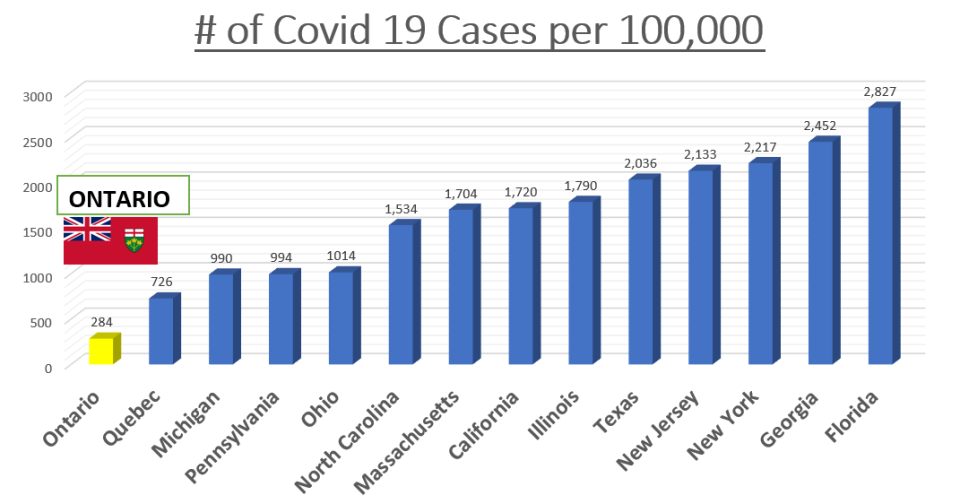 “I want to thank the people of this great province. This has nothing to do with the government,” Ford said on Friday.

“Without the people following the guidelines and protocols and the great front-line health-care workers and the essential service workers … this wouldn’t happen. “