Ontario Premier Doug Ford has announced schools will remain closed to in-person learning for the rest of the academic year, but says the province might be able to enter Step 1 of its reopening plan earlier than expected.

Ford made the announcement alongside Education Minister Stephen Lecce at Queen's Park on Wednesday following a meeting with cabinet.

The decision contradicts the provincial government’s previous promise to reopen classrooms before the economy, which was originally set to begin on June 14.

"It was a hard choice to make, but I will not, and I repeat, I will not take unnecessary risks with our children right now," Ford said Wednesday.

Ford said he’s waiting for advice from Chief Medical Officer of Health Dr. David Williams about whether the province can push forward the Step 1 date.

"We're doing as well as a province can do," Ford said. "As things are going, we may be able to enter Step 1 safely earlier than June 14th. I know it's very important for people in Ontario to get to step one to get, to step two as soon as it's safe to do so."

Step 1 would allow for outdoor gathering limits to increase to 10 people, the reopening of patios, and non-essential retail to reopen at 15 per cent capacity.

Here's a full recap of what will be allowed when Ontario hits Step 1.

Ford did not say when the final decision on the reopening date would be made.

A source told CTV News Toronto earlier on Wednesday the Ford government is still waiting to see whether the Victoria Day long weekend will lead to an "uptick in cases" this weekend, or whether province will continue to see a decline in transmission that follows the recent trend.

Ford said his decision to keep schools closed is partly driven by COVID-19 variants, which have already entered the province. He said the variants can make “younger people very sick” and it’s not a risk he’s willing to take.

"We know the Indian variant is here – it's taken hold – I think it would be irresponsible to put two million kids in the classroom for eight hours a day," Ford said.

Ford said he understands kids will be losing out on valued experiences, so he's asked all school boards to allow for outdoor graduation ceremonies for all grade levels, not just students in grades 8 and 12.

"It should be for all students because we know we must do as much as possible to get people outdoors to enjoy the summer, enjoy the nice weather," he said.

Lecce said that keeping schools closed until September will ensure a safer return to in-person learning. He also said teachers and eligible students will all be offered two doses of the COVID-19 before in-person learning resumes.

"Our focus will continue to be delivering a stable, normal, safe return to in-class learning in September," Lecce said. 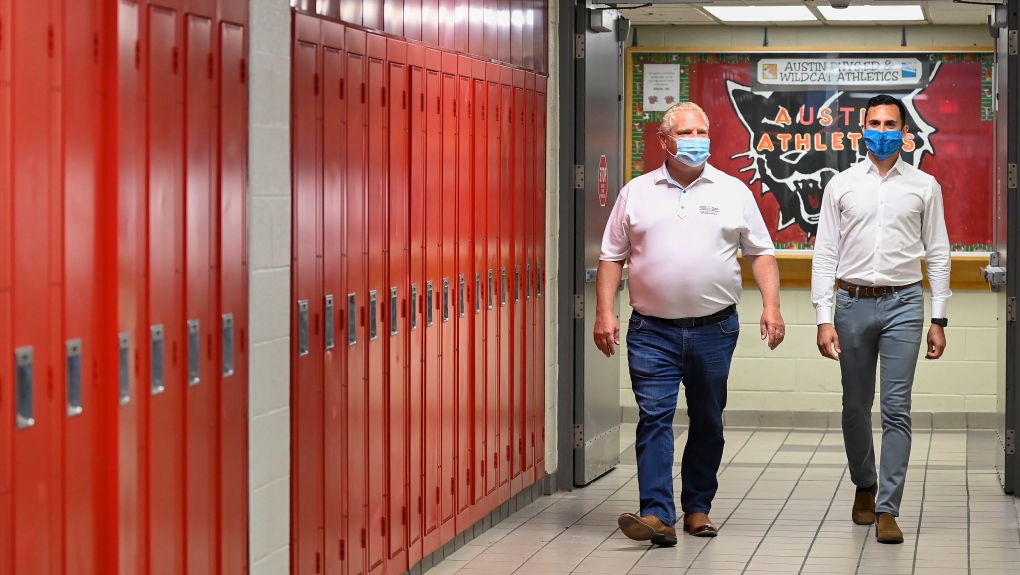 Ontario Premier Doug Ford, left, and Education Minister Stephen Lecce walk the hallway before making an announcement regarding the governments plan for a safe reopening of schools in the fall due to the COVID-19 pandemic at Father Leo J Austin Catholic Secondary School in Whitby, Ont., on Thursday, July 30, 2020. THE CANADIAN PRESS/Nathan Denette

NDP Leader Andrea Horwath blamed on Wednesday Ford for not wanting to spend the money to make schools safe.

"Parents and kids are struggling," she said. "This government needs to make the investments so schools can be reopened safely."

"The Ford government consistently made students and families an afterthought," an ETFO statement said. "They must stop undermining public education and make it a priority. Moving forward, every minute must be spent preparing for a safe and healthy return to in-person learning in the fall, and consultations with stakeholders on updated protocols should begin immediately."

"My position has been always, like our public health measures table and our medical officers of health, that feel that schools should be the last to close and the first to open," Williams told a news conference last week.