TORONTO -- Ontario Premier Doug Ford said it is "concerning" that the province has recorded the highest daily number of new COVID-19 cases in two weeks, adding that he's "up all night" thinking about the recent upward trend.

On Friday, health officials reported 441 new cases of the disease, bringing the total to 24,628. It is the highest number of new patients since May 8, when 477 new cases were recorded.

"I think of it 24/7," Ford said at Queen's Park on Friday while speaking about the recent uptick in cases. "We're seeing some peaks and valleys but hopefully we're going to see the trend go down."

"I know the last few days it has gone up and it's concerning. These are things you are up all night thinking about."

After 10 days of daily case counts being below 400 in Ontario, health officials confirmed 427 new cases of the disease on Tuesday. The number of new patients logged on Wednesday then dipped down to 390 and rose back above 400 on Thursday.

The single-day record for new cases was reported on April 25 when the number jumped by 640.

Earlier this week, Ford said he "wouldn't hesitate" to roll back recent reopening measures across the province if the numbers continue to climb.

"If we see the numbers start spiking, we will roll things back in a heartbeat," Ford said Wednesday. "The health and wellbeing of people in the province is my number one priority."

The province's associate chief medical officer of health, Dr. Barbara Yaffe, also said Friday that the spike in cases is concerning. Yaffe added that health officials will continue to monitor closely for potential hot spots across the province.

Meanwhile, the number of resolved cases in the province also continues to climb. There are now 18,767 patients who have recovered from COVID-19, which accounts for 76.2 per cent of all patients.

There are currently 961 people in hospital with COVID-19 in Ontario, with 153 of those being treated in intensive care. There are 120 people using a ventilator to assist with breathing.

To date, the Greater Toronto Area is responsible for nearly 64 per cent of all COVID-19 cases in the province.

Testing for COVID-19 has been a sore point in Ontario as the province struggles to reach the daily target of 20,000 tests. 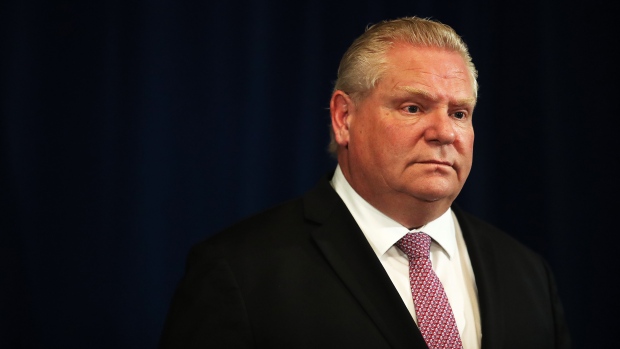 Premier Doug Ford warned health officials on Thursday he "will be like an 800-pound gorilla on their backs" if testing numbers continue to fall below what is expected.

"Am I frustrated? Yes, I'm frustrated, but I have confidence in the team," Ford said at his daily news conference. "They are working hard, they are doing everything they can. We will hit those numbers and I will be like an 800-pound gorilla on their backs every single day if I have to until I see these numbers go up."