TORONTO -- Premier Doug Ford says he's adamant he doesn’t want the border with the United States to reopen and has also urged people from other provinces in Canada to stay away from Ontario.

Speaking to reporters at Queen's Park on Friday, Ford said the topic of the Canada-U.S. border came up on a call on Thursday with the country's premiers and Prime Minister Justin Trudeau.

"I was adamant on the call yesterday with the premiers and the prime minister, I do not want those borders open," Ford said.

"I know Quebec felt the same way and B.C. felt the exact same way. I can't speak for the other provinces but right now, I don't want the borders open."

Ford added that when the borders eventually do reopen, the country needs to increase screening for the virus at airports by “tenfold.”

Ford also urged residents in other provinces to not travel to Ontario until the situation is under control.

"We love our Quebec neighbours but just wait until this is over,” Ford said. “It’s to their benefit, our benefit and the country’s benefit."

In April, Ford fired back at United States President Donald Trump after he suggested loosening restrictions at the border.

Ontario shares a border with Minnesota, Michigan and New York, which is the hardest hit area in the country.

"The answer is absolutely not,” Ford said in April. “I don't want them (Americans) in Ontario." 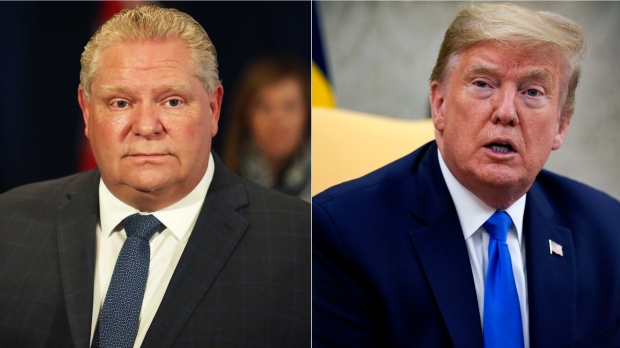 "I want to put the people of Ontario first."

Travel restrictions across the Canada-U.S. border took effect on March 21. That agreement exempted the flow of trade and commerce, as well as vital health-care workers such as nurses who live and work on opposite sides of the border.