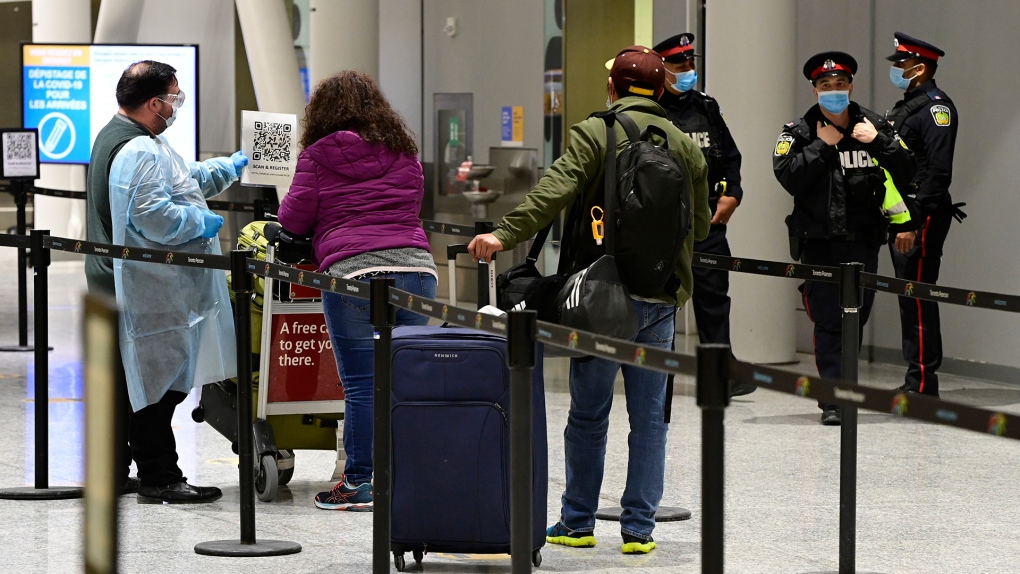 Travellers, who are not affected by new quarantine rules, arrive at Terminal 3 at Pearson Airport in Toronto early Monday, February 22, 2021. Prime Minister Justin Trudeau announced that all travellers entering Canada by air would have to quarantine in a hotel for three days at their own expense starting later today. THE CANADIAN PRESS/Frank Gunn

TORONTO -- The province will not develop a mass screening tool to easily and quickly detect the B.1.617 coronavirus variant first discovered in India, as officials said they are now aware of 45 cases throughout Ontario.

Instead, Public Health Ontario (PHO) says it is ramping up its ability to conduct whole genomic sequencing to map thousands of cases each week.

“Routine variant testing for the B.1.617 variant via PCR is not being considered at this time as we look to refine our genomic sequencing surveillance work to a more statistically robust approach consistent with the (European Centres for Disease Control) and the UK so that we can track both B.1.617 and future variants of concern in a consistent, timely and proactive way,” a PHO spokesperson told CP24

But sequencing is laborious and costly, and will not allow for screening of every or even the majority of samples at current case rates.

PHO says they are working to be able to sequence 2,000 samples per week.

Using the average of new daily cases from the week of May 8-15, Ontario generated more than 18,000 cases.

B.1.617 was designated as a global variant of concern by the World Health Organization last week.

After witnessing exponential spread that eventually saw an earlier variant, B.1.1.7, become the dominant strain in the province, PHO and its allied labs developed a screening tool earlier this year that could classify positive COVID-19 samples as likely variants of concern quickly and easily without resorting to whole genomic sequencing.

As of this past Thursday, PHO says 45 examples of the B.1.617 variant have been detected in the province, with 37 of them positively linked to international travel.

“Investigation is continuing for the remaining 8. We do not have hospitalization data for these cases,” PHO said. An earlier briefing indicated at least two of the 45 known cases required hospitalization.

PHO says they may begin regularly disclosing how many examples of B.1.617 are found in the province in the coming weeks.

“We are examining weekly reporting of the B.1.617 variant in Ontario, and can provide more details within the next week or two.”

The B.1.617 variant and two other related strains have devastated the health system of India, overwhelming hospitals and causing known COVID-19-related deaths to surge to 3,000 to 4,000 per day.

A recent preliminary study by Public Health England indicates B.1.617 is at least as transmissible as B.1.1.7, with little known about whether it causes more severe disease.

UK authorities have also designated B.1.617 a variant of concern and are using mass PCR test sample screening and whole genomic sequencing to help detect it.