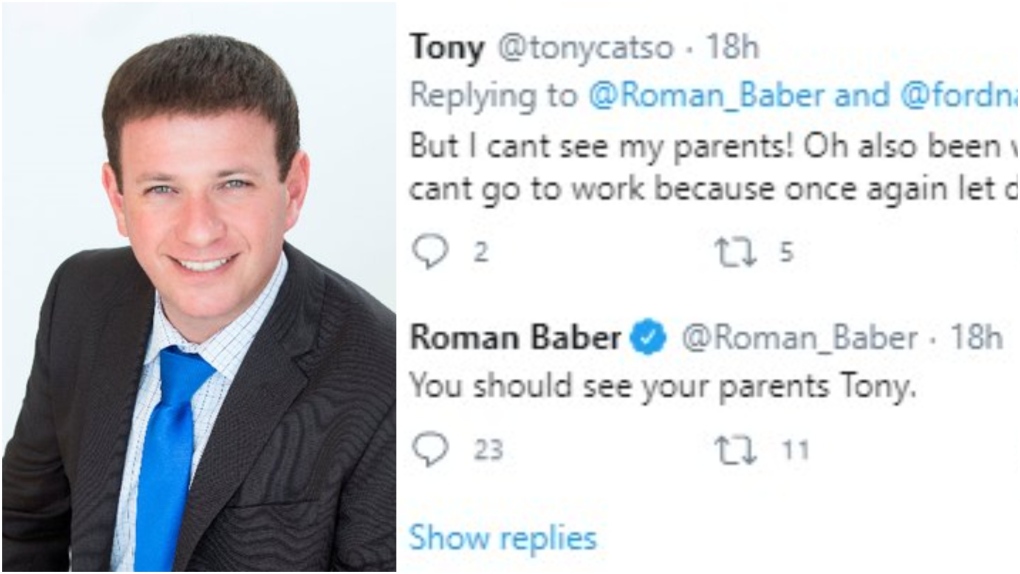 Ontario MPP Roman Baber told a resident who said he was "waiting 5 days for COVID results" to visit his parents in an apparent contradiction of the province's public health measures. (Twitter/Roman Baber)

TORONTO -- In what appears to be a clear violation of his own government’s public health measures, a Toronto-based MPP took to Twitter to encourage a resident to visit his elderly parents while awaiting the results of a COVID-19 test.

Roman Baber, MPP for York Centre, was voicing his support for Ontario Premier Doug Ford’s stance on keeping Toronto restaurants open, despite the city asking for tougher rules in response to a surge of COVID-19 cases.

“I am 100 per cent with Premier @fordnation on this one,” Baber wrote. “Plus I am going for dinner!”

Antonio “Tony” Stravato responded to the tweet while lamenting that he is unable to visit his parents under the new rules on gathering sizes in Ontario while stating that he was awaiting the results of a COVID-19 test.

“You should see your parents Tony,” Baber responded, in a tweet that has since garnered intense criticism online.

You should see your parents Tony.

According to the government’s website, while awaiting test results for COVID-19 residents should isolate themselves from others if they have COVID-19 symptoms or may have been exposed to COVID-19.

Speaking with CTV News Toronto, Stravato could be heard coughing multiple times but said he would need to wait on the results of the test, which he clarified was for one of his seven-year-old sons, before knowing whether or not he has in fact contracted the disease.

“But if he has it, chances are I do too,” he said, adding that he has his own test scheduled for Wednesday.

Like most others, Stravato admits that the pandemic has been challenging for him, so learning that he could potentially see his parents again was welcome news.

“For me I stayed home for four months because I have two autistic children and they couldn’t go to applied behavior analysis therapy anymore,” he said. ”I can’t have them getting sick, they’re both non-verbal, if they get sick they have to go to the hospital. There’s no way they can be alone.”

Because of that, he says he’s been leaning on his 73-year-old father and 70-year-old mother for support.

“They’re old. We really count on them for support right now.”

In a statement provided to CTV News Toronto, Baber’s executive assistant said the MPP’s response was of a “general nature about the importance of family and mental health.”

“He quickly clarified that if tested, one ‘should wait for negative diagnosis and after that exercise good judgment.’”

However, a quick glance at Baber’s twitter profile will show that he made the comment at around 10 p.m. Monday and only began clarifying the statement on Tuesday morning. He has also not removed his original tweet.