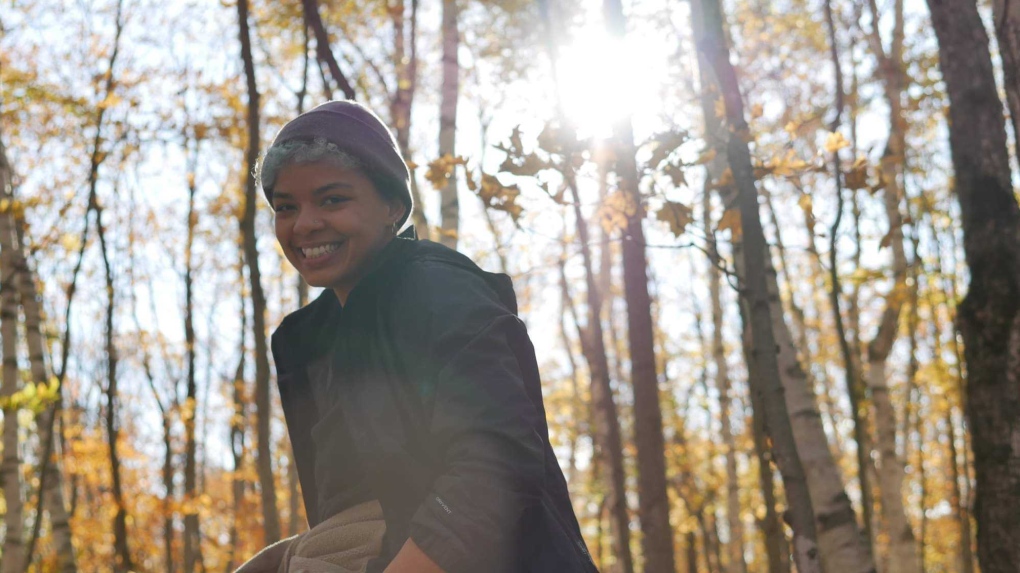 The mother of an Ontario artist and activist who was found dead at a Toronto construction site last week says she has not been permitted to see her daughter’s body and that many of her questions around the incident remain unanswered.

On March 31, just after 8 p.m., Toronto police said they received a report that an individual had fallen off a roof of a construction building at Bathurst and Bloor streets. When they arrived on scene, officers said they found 22-year-old Vanessa—also known as Ezra—Amos on the ground.

Amos was then transported by medics to Toronto Western Hospital where they were pronounced dead.

Amos’ mother, Brandy Schlemko, says she’s received no information as to why or how her child fell from the site. Police have said there is no reason to believe the death was suspicious, but she says the circumstances remain unclear.

Speaking through tears outside of Toronto Police Service’s (TPS) 14 Division Monday morning, Schlemko demanded further clarity around the death and aftermath of the incident.

In addition to not knowing the circumstances around her child’s death, Scklemko claims she wasn’t informed in a timely manner and that her questions about an interaction Amos had with Toronto police and Toronto Western Hospital prior to her death haven’t been answered.

“[Amos'] family and community are deeply distressed, not only at their loss but also at the lack of transparency from public officials,” a statement issued on behalf of the family said.

The day before Amos died, they had another interaction with Toronto police.

On the evening of March 30, just after 10:30 p.m., TTC constables responded to Bathurst Station for reports of an individual, later identified as Amos, in apparent medical distress. The TTC said they called first responders, including Toronto police, to the scene, as "is usual in the case of individuals in medical distress."

Schlemko says officers informed her Amos was spotted by TTC staff using video surveillance sitting on the ledge of the subway platform. She was told her daughter was found ‘unresponsive and catatonic,’ and placed in 'a resuscitative state'' after which ‘an exchange of blows’ took place between Amos and the TTC constable, resulting in Toronto police placing Amos under arrest.

Schlemko says she has requested to view the surveillance video mentioned, but has since been told by police it doesn’t exist.

In a statement to CTV News Toronto, TPS did not provide any details on what the interaction between Amos and the TTC staff member looked like, but confirmed it resulted in Amos being arrested for alleged assault and issued a court date for May 24.

After being arrested, police say Amos was transported to Toronto Western Hospital by medics and admitted under Ontario’s Mental Health Act.

Schlemko said Amos was initially admitted to Toronto Western on a 72-hour hold, but documents obtained by Schlemko and shown to CTV News Toronto show Amos was actually released on March 31, less than one day later and just hours before they’d be found dead by police. The reasons surrounding her early release remain unclear.

“We have been trying to call the hospital and reach the Western officials who were actually in contact with [Vanessa] between March 30 and 31,” Schlemko said at Monday’s press conference. “We have not been provided any contact.”

A LACK OF COMMUNICATION

According to Schlemko, Toronto police officers also didn’t inform her of Amos' death until the day after it took place.

TPS told CTV News Toronto this was because they required time to conduct formal identification, including contacting a police service outside of their jurisdiction to confirm Amos’ identity.

Schlemko says she received a knock at the door on April 1 at around 7:30 a.m. Upon answering, she said two Ontario Provincial Police (OPP) officers informed her they had “bad news” about her daughter. She said she was given a phone number to call for more information.

“The first time I called, the detective was not in the office, but I begged for someone to give me some information as to where my daughter’s body was,” she said.

Since then, she said she hasn't received any updates from police, nor has she been permitted to view or identify her daughter's body.

“I don’t know what’s going on right now, but I need answers. That’s the bottom line,” she said.

“I’m telling you right now. I’m not going to stop until I figure it out.”

While speaking to the crowd of spectators Monday, Schlemko said many questions still remain around her daughter’s death.

Most importantly, she wants to ensure a full investigation is launched into the circumstances surrounding the series of events that took place on March 30 and 31.

“We … demand that the Toronto Police Services release the details surrounding [Amos]’ death and hospitalizations, and allow family to see the body,” she said.

“That’s all I’m asking - for a proper investigation.”

As for next steps, Schlemko says she wants to have a thorough conversation with the detective on Amos’ case.

“I would appreciate somebody to take the time out of their busy schedules to speak with a mother of a deceased child,” she said.

As per Amos' family's request, we have referred to Amos as 'Vanessa' in this piece. According to the family, Vanessa changed their name from 'Ezra' back to 'Vanessa,' while using they/them pronouns, in the weeks before their death. At the time of their death, Vanessa's social media accounts were still displaying the name 'Ezra.'