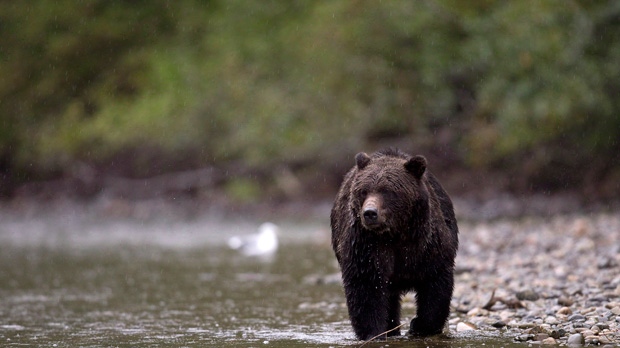 Animal Alliance of Canada and Zoocheck Canada say mother bears will be killed during the hunt, leaving their orphaned cubs to starve or be killed by predators. (Jonathan Hayward/The Canadian Press)

TORONTO -- TORONTO -- A spring black bear hunt could soon be a permanent annual event in Ontario again, the provincial government suggested Friday as it launched a public consultation on the idea.

The move would mark a form of departure for the Progressive Conservative government by seeing it formalize a pilot project initiated by the Liberals in 2014, while reversing a position struck by a previous Conservative regime more than two decades earlier.

Natural Resources Minister John Yakabuski described the move as a boon for the province's economy and tourism sector.

"We are listening to the concerns of northern Ontarians and the tourism industry that an ongoing pilot spring season creates economic uncertainty," Yakabuski said in a statement. "A regular, monitored spring bear hunting season would enable tourism outfitters and camp owners to better plan their operations for the entire year, while also allowing hunters to better plan their activities and support local businesses."

The spring black bear hunt has been a testy political issue since 1999, when the government led by Progressive Conservative premier Mike Harris cancelled the event. That move was prompted by concern for cubs left orphaned when hunters inadvertently shot their mothers.

Pro-hunting organizations began calling for its reinstatement almost immediately, citing an increase in the number of nuisance bear complaints among their reasons.

The Liberal government that took office in 2003 and held power for the next 15 years countered that the spike in complaints was the result of a government education program dubbed Bear Wise, which urged Ontario residents to report any problematic encounters with the animals.

Nonetheless, the Liberals partially reversed the decision in 2014 by re-establishing a spring hunting season as a pilot project.

The hunt went ahead in every subsequent year, but supporters argued the pilot designation kept its status in flux and put a damper on the outfitting and tourism industry.

One of those supporters, the Ontario Federation of Anglers and Hunters, was quick to praise Friday's announcement.

"The spring bear hunt was always a sustainable wildlife management activity," said federation wildlife biologist Keith Munro. "Nothing has changed in that regard since it was cancelled and today's proposal is a final step towards correcting a long-standing mistake. In our view, it's long overdue."

Yakabuski said all existing animal protections in place during the recent pilot projects would remain in effect under the new proposed rules, including an outright ban on killing bear cubs or mothers with their young during the spring.

She said hunters struggle to distinguish between male and female bears even at close range, adding that challenge all but ensures the issue that prompted the cancellation in the first place is bound to surface again.

"This is a death warrant for innocent baby bear cubs who will be orphaned and die when their mothers are gunned down by hunters after emerging from hibernation in the spring," she said. "It's deeply disappointing that the current government has so little regard for the majestic creatures with whom we share this province."

"Any decision to reinstate a permanent spring hunt must be based on science," he said in a statement. "Hunting of any species cannot be driven purely by economic interests and should only be considered if the population is healthy. Consultations must include First Nations, scientists, and conservationists."

Members of the public can weigh in on the potential changes by submitting feedback on the Environmental Registry of Ontario until Feb. 18.

This report by The Canadian Press was first published Jan. 17, 2020