TORONTO -- Ontario's education minister has explained why a decision on whether students will head back to the classroom in June hasn't been made yet.

Speaking at Queen's Park on Wednesday, Stephen Lecce said parents can “absolutely expect an outcome” by early next week but could not say which way the decision is heading.

"The reason why is because we are looking to updated modelling from the Chief Medical Officer of Health and the Command Table," Lecce said.

Schools across the province have been closed since mid-March due to the COVID-19 pandemic. The province said last month they would be closed until at least May 31.

"I appreciate for parents out there, educators, kids, they want to know the plan and they deserve to know the plan," Lecce said. "Our duty is to make sure we land in a place that is consistent with the values of families of this province, which is safety must come first."

"We're doing that in real time."

Lecce said he's also receiving advice from other medical leaders when it comes to making the important decision, as well as advice from the leadership team at The Hospital for Sick Children.

"The leadership team of SickKids will provide perspective as well, among other inputs we're seeking to make sure we get the right decision."

He added that regardless of next week’s decision, Ontario will ramp up in a “significant way” the current online learning program to keep students engaged in the curriculum. 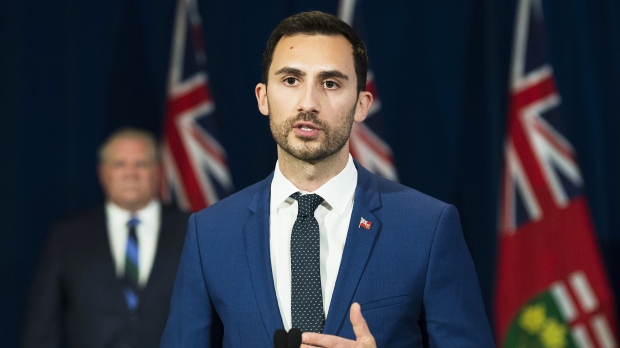 Lecce also announced on Wednesday that education workers can voluntarily step up and fill staffing gaps in hospitals, long-term care homes, shelters and other congregate settings.

The government is asking educational workers who are not currently engaged in online learning activities to volunteer at front-line facilities. The volunteer positions include custodial, maintenance, food preparation, children and youth service workers, social workers, and educational assistants.

The province said that all volunteers will receive training and safety equipment. They will also be eligible for Ontario’s temporary pandemic pay and emergency child care.

Lecce said that the voluntary redeployment of education staff should not be indicative of a decision on the government's part on whether schools will reopen in June.

"I wouldn't read into that at all," he said.

Education Minister Lecce says the government is looking to receive updated COVID-19 modelling before making its announcement "early next week" on the future of the school year.

There will also be a "learning plan in the summer," Lecce says. #onpoli #onted