A group of families that successfully sued the province for autism funding more than 15 years ago are taking on Queen’s Park again after their funding was slashed by the Progressive Conservative government.

On Monday, lawyers representing the families served the Ontario government with a requisite 60-day notice of intent to sue over what they call “breach of contract, negligence and breach of sections 7 and 15 of the Canadian Charter of Rights and Freedoms.”

Brenda Deskin, one of the complainants involved in the lawsuit, said that her son lost his funding in August.

“We are in survival mode, trying to get through every day,” Brenda Deskin said.

The 24-year-old scored in the 93rd percentile on the Autism Spectrum Rating Scale, and is prone to self-harming activities.

“It’s impossible. I mean, even this morning I went down to get some medicine for him when I was on my own and I found him jamming his gums with a corner of an armoire in our room.” 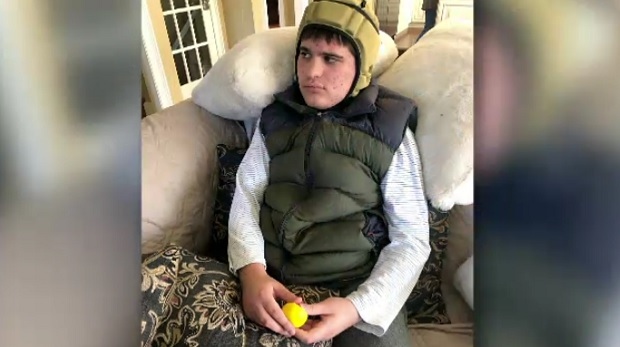 Michael Deskin, 24, is seen in this undated photograph provided by family. (Submitted)

Up until August, Michael Deskin had received 40 hours a week of intense services and supports. But in February, his family was given six-month’s notice that his funding would be cut off. Suzanne Van Bommel, a spokesperson for the families, said that the explanation was “odd,” as it cited changes to the Ontario autism program. But the program, Van Bommel, doesn’t apply to Michael Deskin, who is not a child.

According to the legal documents filed this week, his funding “had been provided since 2004 as a result of a court order.”

The Deskins are part of a group of 28 families that took legal action against the then-Liberal Ontario government a decade-and-a-half ago. They argued that an age six funding cap was “discriminatory” and a judge agreed.

“As a result of that court case, (the families) received court-ordered funding for specialized supports and services for their children. There was no age cap for that funding,” said Van Bommel said.

That is, until their funding was pulled in the summer.

“Fast-forward 15 years later, and we were just astonished to wake up one morning, to a couriered letter, on February 5th, letting us know this government would be cutting off our funding in six months,” Brenda Deskin said. “We were just flabbergasted. We couldn’t believe it.”

Legal documents filed on Monday by Henein Hutchison LLP also make mention of a letter Deskin received from the Ministry of Community and Social Services in February 2007. At the time, then assistant Deputy Minister Alexander Bezzina confirmed his commitment to ensuring Michael Deskin has access to the services he needs.

“I would like to affirm in writing the commitment I made to you on behalf of (Ministry of Children and Youth Services) when I visited you: that no changes would be made to the manner in which your son’s program is currently administered nor to the funding amount unless you were completely satisfied with alternative arrangements,” Bezzina wrote.

“We made plans for our lives, based on this letter, and as difficult as life was, I knew we would have support. And to have this is just like having the rug pulled out from under us.”

Apart from the Deskins, seven of the families involved in the original lawsuit are also taking part in this new legal battle.

“I think it’s really sad. It’s with great reluctance that they are once again exposing themselves to the public,” said Van Bommel. “They have built lives for their children based on a promise, based on a contract, and now they’ve found themselves thrown into limbo, thrown into crisis, and they have no other choice.”

In a written statement, Christine Wood, a spokesperson from the Ministry of Children, Community and Social Services told CTV News Toronto that “it would be inappropriate to comment further as this matter may be the subject of litigation.”

“Our government is committed to providing a needs-based, sustainable autism program that supports as many children as possible. That is why we are investing a record $600 million into the Ontario Autism Program,” the spokesperson said.

But Brenda Deskin says the statement from the government is misleading.

“That $600 million is earmarked for children. Autism does not disappear when someone turns 18 years of age.”

And she said she is begging the government to think about Michael Deskin and other adults living with autism, and reconsider its decision.