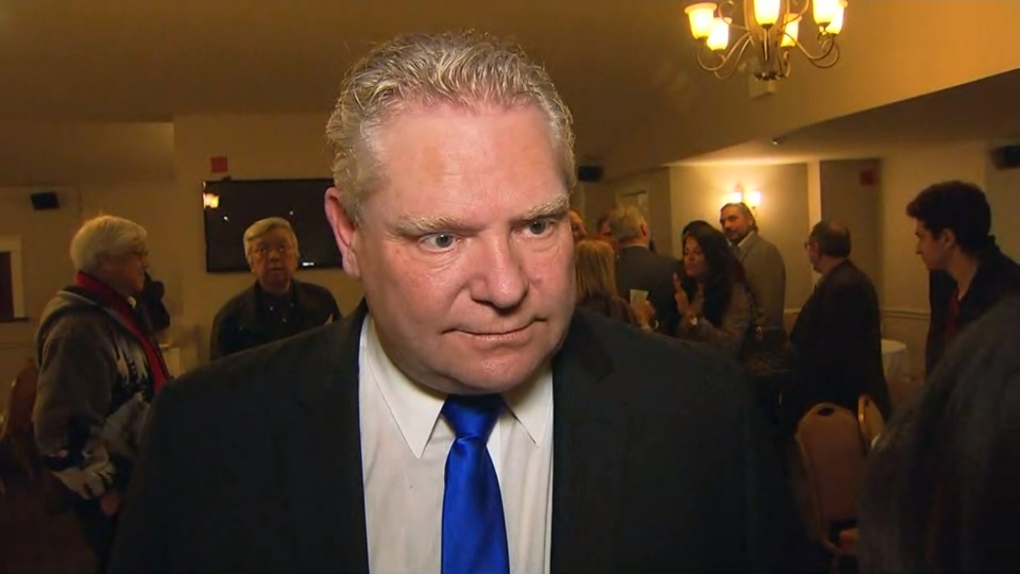 Organizers of the first community debate ahead of the provincial election this June are expressing their disappointment after learning PC Leader Doug Ford will skip the event.

Ford's campaign team says scheduling issues will prevent him from attending the debate hosted by the Jamaican Canadian Association on April 11th.

"Doug Ford is scheduled to be in Northern Ontario on April 11th," campaign spokesperson Melissa Lantsman said in an email to CTV News Toronto. "We scheduled this before we were made aware of the invite."

Organizers say the planning work began in early March by Operation Black Vote, an organization dedicated to increasing voter turnout among the GTA's black community. Invitations were sent out at the beginning of March, immediately after Ford was elected to lead the PC party on the 11th.

"Everyone expressed an interest, except the leader of the Conservative party," said Adaoma Patterson, the President of the Jamaican Canadian Association. "My understanding is Mr. Ford was extended an invitation and declined that invitation."

Patterson said when flyers for the debate were posted online, organizers were contacted by members of the PC Party asking why Ford wasn't featured on the advertisements. That discussion triggered a second invitation, which was also declined.

"Organizers are disappointed that the leader will not be attending," Patterson said, adding the community will have an opportunity to ask questions of the leaders directly. "We think it's important to be there."

Community activist Andray Domise, who once ran to replace Doug Ford in Ward 2 on Toronto City Council when Ford ran for Mayor in 2014, tweeted his displeasure with the news.

Looking forward to the results of this debate, and also looking forward to #onpoli media actually paying attention to a major party leader refusing to answer questions from the Black community. pic.twitter.com/ULa2HQGBCR

A spokesperson for Horwath said the debate is important to the NDP leader.

"We'll leave it to Doug Ford to explain why he won't attend," she said.

Ford's campaign spokesperson says the election campaign team spoke directly with the organizer in March, telling CTV News Toronto the trip to Northern Ontario had already been planned when they were made aware of the debate.

She also added Ford has been meeting with Ontarians of every background. "Doug Ford will be a Premier for all Ontarians and will bring relief to families, including those in the black community."

The election will take place on June 7th.