TORONTO -- Ontario's education minister opened the door to more measures in schools in September as the government's plan to safely reopen schools in the province comes under sustained criticism from education unions, school board officials and parents.

"We've put the investments in place, we lead the nation in the context of that investment, we're also open and willing and stand ready to listen to our medical leaders to do more to further de-risk the circumstances and keep these kids safe which is our obligation," Stephen Lecce said Thursday.

While epidemiologists have repeatedly told the province that one metre between desks is good and two is better, Ministry of Education officials speaking on background last week could not commit on a minimum distance in classrooms, and the guidance document submitted to school boards does not specify a minimum distanceeither.

Lecce insists schools will be able to maintain one metre of distancing.

When questioned about spacing in schools, both Lecce and Ford have repeatedly brought up Ontario's low elementary class size averages in comparison with other provinces. 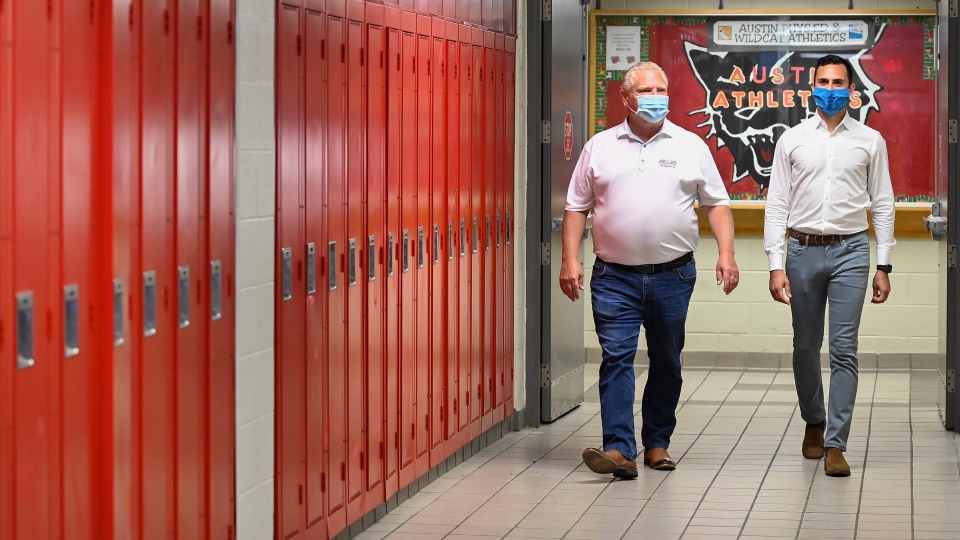 "We have the lowest number of kids in the classroom in the country," Ford boasted, not acknowledging that medical concerns are focused on how the kids are physically spaced in a classroom, not the actual numbers of students in each room.

"Do we all want smaller class sizes, 100 per cent but I think the plan is phenomenal, it's the best plan in the entire country, bar none," he said later.

Opposition NDP leader Andrea Horwath called on Ford to scrap the back-to-school plan and start over on Thursday.

"If I were premier right now, I would be capping class sizes for all students, and hustling to get temporary classroom spaces, teachers and education workers lined up for all those classes," Horwath said in a statement.

A petition calling on the province to enforce basic physical distancing in elementary classrooms has been signed by 167,000 people, equivalent to four per cent of all the parents of school-age children in Ontario.

Ford says union leaders are not who he trusts for medical advice about COVID-19.

"I will always take the advice of world class pediatricians and epidemiologists over the head of any union," he said when asked about the criticism.

Ford's plan includes $80 million to hire additional workers for schools if necessary, but the Toronto District School Board has estimated that it would cost $250 million to space elementary school kids into cohorts of 15 in Toronto public schools alone.

Ontario Chief Medical Officer Dr. David Williams said that all the science he has access to suggests that the risk of infection for elementary-age children is "very small."

He said that parents need to consider all of the measures schools are taking in concert and not just focus on one, adding that the most important factor is the prevalence of the virus in each community.

"If you don't have any cases in the community it's very unlikely the children will bring that in to the school."