TORONTO -- The organization representing Ontario doctors is calling on the provincial government to make immediate changes to the way it pays physicians for virtual care during the pandemic.

The president of the Ontario Medical Association (OMA), which represents the province’s 32,000 physicians, said that doctors made an agreement with the government in ‘good faith’ to increase physical distancing and help flatten the curve with virtual care.

Doctors were given a set of billing codes to charge the government for phone and virtual appointments, but Dr. Sohail Gandhi said they don’t expect to receive compensation for those services until mid-June.

“It makes no sense to me whatsoever and I think it’s really felt by many physicians to be quite frankly a betrayal on the part of the government,” Gandhi said from Stayner, Ont. where he is a family physician.

In a statement to CTV News Toronto, the Ministry of Health said it thanks Ontario’s doctors for using this new tool in the fight against COVID-19 and the province expects to be ready to start processing claims in early May.

“Since their introduction, there has been considerable uptake, demonstrating a clear need,” the ministry said.

“The Ministry continues to have regular conversations with the Ontario Medical Association on a wide variety of issues to address questions and concerns."

Gandhi explained to CTV News Toronto that even with the May processing date, it takes about a month for doctors to receive the money.

He said based on a survey of the OMA’s members, about 49 per cent are considering closing their clinics for a period of time.

“Because there is just not enough money to pay the receptionists or the nursing staff or the overhead,” Gandhi said.

He said that about 49 per cent of members have laid off some staff and 53 per cent are planning to lay off more staff if the billing issue is not rectified.

According to Gandhi, the number of patients doctors are seeing overall is down as well, as many are being encouraged to stay home.

Mississauga clinic Q & A Allergy is doing almost all appointments by phone or online, but said since the pandemic hit work has dropped by half. They have let go of one-third of its staff.

“It was really heartbreaking to actually lay off people and it’s also difficult because we have to reduce hours for people who are working,” said Dr. Zainab Abdurrahman. 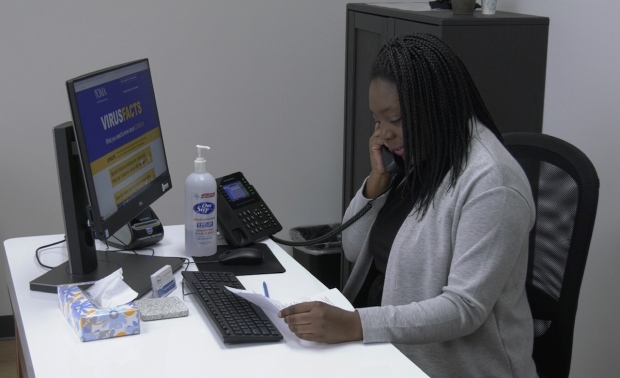 “We need this [billing issue] addressed now. This can’t be done later,” she said.

Instead, Gandhi wants the government to allow doctors to use the same codes they used to for in-person visits, as they carry the same value and can be processed faster.

“We’re told it takes time to program the OHIP computers, the billing system and that the computers are old and the programming language is old and that they can’t possibly process this in a reasonable length of time,” said Gandhi.

“Quite frankly in the current situation it’s not acceptable.”

Gandhi said the government has refused to let them use the regular codes which would speed paying doctors, and if they can’t get computers working with the new codes they could issue a ministerial directive to alleviate the issue.

“Allow the doctors to bill their regular codes for this period of time while our programmers are working on it., it’s the exact same amount of money,” said Gandhi.

The Ministry of Health told CTV News Toronto that it was important physicians use the correct billing codes, “as it will inform our efforts to expand virtual care in the future."

“Any physician experiencing temporary loss of income can apply for generous federal programs to supplement their earnings and help cover overhead costs,” a spokesperson said.

“The province continues to have regular conversations with the OMA and frontline physicians on a wide variety of issues, including at our Collaboration Table, Communications Table and Primary Care Advisory Table."

Speaking to reporters on Friday, Health Minister Christine Elliott said they are working with the OMA to try and come up with a solution to the billing issues.

“We know there are a number of physicians that are concerned about keeping their offices open, keeping their staff in place, paying for their overhead, paying for the machinery and the equipment that they have, so we are looking for a solution that is going to work for doctors in ontario and we hope to have that solution available very soon."