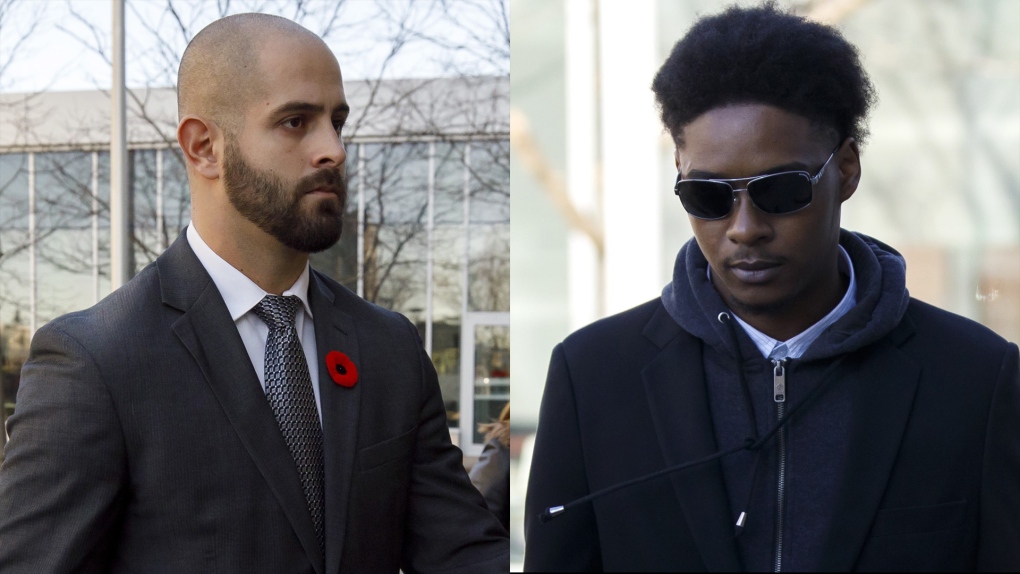 Ontario’s top court has upheld the conviction and sentence of Const. Michael Theriault, the off-duty Toronto police officer who assaulted Dafonte Miller in an attack that left the young Black man blind in one eye.

Earlier this year, Const. Michael Theriault was found guilty of assault in connection with a December 2016 attack on Miller, then 19.

Theriault was initially charged with aggravated assault but was found guilty of the lesser included offence of assault as Ontario Superior Court Justice Joseph Di Luca could not rule out the possibility that during a portion of the incident, the off-duty officer was acting in self-defence and attempting to carry out a lawful arrest. He was also charged with obstruction of justice but was acquitted.

Theriault, who was sentenced to nine months in jail, subsequently appealed both the conviction and sentence.

His lawyers argued that simple assault should not be considered an included offence, that the trial judge misapprehended evidence, and that the sentence was unfit given that it was outside the normal range.

In a decision released on Monday, Ontario’s highest court rejected the appeal on all grounds and confirmed that the sentence imposed by the judge was justified.

“The trial judge correctly concluded that this case called for heightened denunciation and I endorse his approach,” the decision read.

“As our society comes to grips with disproportionate rates of police violence against Black people, it is integral that the need for denunciation of crimes that are emblematic of these broader social patterns develops accordingly.”

The trial judge said while the Crown did not allege that the attack on Miller was racially-motivated, "the racialized context with which the offence took place cannot be ignored," adding that community concern about race and policing is at an "all-time high."

Both Theriault and his brother were initially charged in connection with the incident but Christian Theriault was cleared of all charges following the judge-alone trial.

The attack occurred in the area of Thickson Road and William Stephenson Drive in Whitby in the early morning hours of Dec. 28, 2016.

During the trial, the Theriault brothers told the court that the altercation took place after they attempted to arrest Miller for trying to break into a car parked in the driveway of their parents’ home.

They claimed they were acting in self-defence when they assaulted Miller but the trial judge said it was clear that was not the case in the latter part of the incident when Miller was retreating.

“Mr. Miller was badly injured, his eyeball was ruptured, and he was bleeding profusely," the judge said.

Miller’s injuries were so severe following the assault that he was left blind in one eye and now wears a prosthetic.

The appeal court noted that Theriault’s actions “shattered a community’s trust in the very system that is supposed to protect them.”

“Michael’s actions, as a white off-duty police officer who assaulted a retreating, injured Black youth, cannot, and should not, be divorced from this wider context,” the decision read.

“Mr. Miller may have broken the law that night, but he did not deserve what subsequently happened to him. The right to be free from excessive and unreasonable force does not discriminate. The trial judge’s treatment of this larger context in sentencing was laudable.”

In an online news conference following the decision, Miller called the upholding of the conviction ‘a huge step’ toward justice.

“For me, I just feel like the decision today was obviously a huge step forward because I find the  acknowledgement that racism plays (a part) in police interactions, not only in my situation specifically but other people who be going through the same situation as me, it was really important,” Miller said.

His mother, Leisa Lewis, added that she is grateful that there has been some “accountability” for what happened to her son.

“I'm just grateful that we're at the point now where we can actually move on and try to just rebuild,” she said.

However Miller’s lawyer Julian Falconer expressed anger that the system that sought to ignore Miller’s brutal beating has failed to hold others to account.

“Inspectors who magically didn’t connect with SIU and furthered the cover-up, they’ve ‘retired’ out of accountability,” Falconer said. “It’s nonsense.”

The Crown’s appeal of the case was also dismissed by Ontario’s top court on Monday.

The Crown took the position that prosecutors would not seek a new trial unless Theriault’s conviction was overturned.

“My dismissal of the Crown’s appeal… should not necessarily be taken as agreement or disagreement with the trial judge on the issues the Crown raises,” the Court of Appeal decision read.

“My reasons do not consider the merits of the Crown appeal. Rather, given the Crown’s position and my decision to uphold the conviction for common assault, these reasons focus only on the grounds of appeal raised by Michael.”