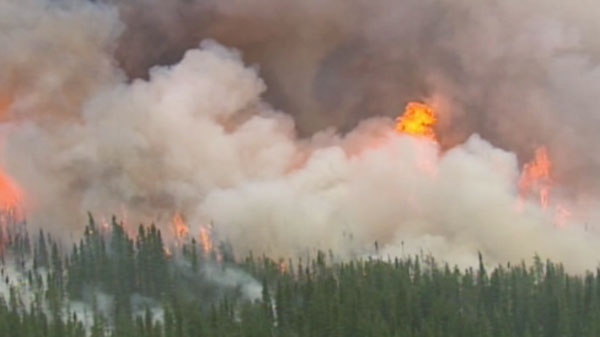 More than 30 new blazes are expected over the coming days.

OTTAWA - A northwestern Ontario chief is asking the provincial and federal governments to commit all available emergency resources to help First Nations threatened by forest fires.

More than 115 forest fires are raging across northwestern Ontario, and Beardy says thousands of residents are in immediate danger from the growing flames and dense smoke.

About 750 residents of Sandy Lake First Nation have been evacuated to Thunder Bay, and 230 residents of Kingfisher Lake First Nation are on standby for evacuation. "I am also asking the Province of Ontario to declare a state of emergency so that all necessary resources can be directed to protect the health and safety of the residents of these communities," Beardy said Tuesday.

"Many remote First Nations under imminent threat from these fires rely completely on air transportation," he said. "There is a very real danger that heavy smoke from these fires could prevent aircraft from landing, making it impossible to get people out safely if an evacuation is ordered." About 75 evacuees from Cat Lake First Nation, mostly young families, are settled into Dryden High School.

Officials said another 75 Cat Lake residents could arrive in Dryden on Wednesday.

Dr. James Arthurs, medical officer of health for the Northwestern Health Unit, said his offices have been inundated with calls from residents who are suffering from the smoke.

Residents were advised to stay inside and keep their windows and doors closed, Arthurs said.

More than 2,000 firefighters are involved in the battle, with more help expected in the coming days from B.C. and Newfoundland, MacLean said.

The ministry also has air support from Alberta and Quebec.