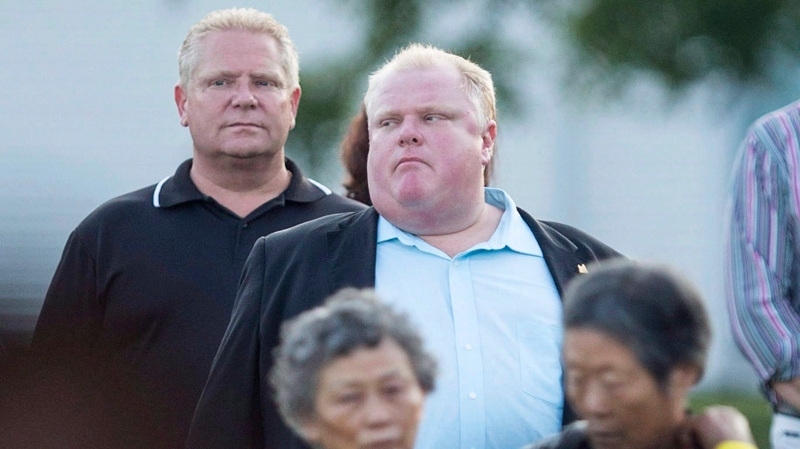 In dismissing two separate public complaints, the council found the Star and Globe and Mail had engaged in responsible, ethical investigative reporting.

The Ford brothers, the council said, were given more than ample opportunity to respond before the papers published their stories in May.

"The panel concluded that the Star and the Globe both followed appropriate journalistic guidelines in their reporting on the Fords," George Thomson, chairman of the panel that heard the complaints, said in a statement.

The mayor had no comment when asked about the press council's decision.

Dozens of readers had complained about the newspapers' coverage of the Fords.

In its story, the Star detailed how two of its reporters had viewed a cellphone video it said showed the mayor smoking what appears to be crack cocaine.

The Globe ran a separate account that alleged Coun. Ford had dealt drugs in his west-end neighbourhood as a young man.

The press council, an industry arbiter, accepted two representative complaints, one from Darylle Donley, who accused the Star of letting its distaste for the mayor's policies taint its coverage.

The video could have been a fake, and the Star should have bought the footage it said was being shopped around by drug dealers to back up its story, Donley argued.

In her complaint, Connie Harrison faulted the Globe for undermining the public trust by using anonymous sources to tell the story of Doug Ford's alleged drug dealing.

"We don't know who to believe at this point," Harrison told the panel at a hearing last month.

In their defence, both newspapers said they had taken every possible step to ensure their stories were both accurate and fair.

They argued they went to extraordinary lengths to verify the information, and had repeatedly asked the Fords for their side of the story -- to no avail.

They also argued it was in the public interest -- given the Fords' positions -- to publish the material.

The Globe said it had to rely on anonymous sources for confirmation of its information.

The press council also decided the Globe was right to include other Ford family members in its story, but qualified the decision.

"The Globe came close to crossing the line into what are the problematic, but private affairs of family members," the council wrote.

"However, the council believes that the overall theme of the article ... justifies reference to the actions of these other family members."

The council urged news organizations to do more to ensure the public understands their journalistic approach and why stories serve the public interest.

"Transparency will help consumers of media better understand the reasons behind decisions to cover specific issues," Frances Lankin, chairwoman of the press council, said in a statement.

Mayor Ford has never substantively addressed the drug allegations against him, saying only he does not smoke crack cocaine and that the video in question does not exist.

His brother vehemently denied the drug dealing allegations after they were published.

Neither newspaper story has been independently verified.

The Ontario Press Council, which is funded by its member news organizations including the Globe and Star, does not verify the facts of a story but rather whether a member has followed appropriate journalistic standards in publishing.

The parent companies of both the Star and the Globe and Mail hold an ownership stake in The Canadian Press national news agency as part of a joint agreement with the corporate parent of Montreal's La Presse.