TORONTO -- Liberal candidate and former Olympic athlete Adam van Koeverden has been elected as the Member of Parliament for Milton, defeating Conservative Lisa Raitt who has held the riding since 2008.

More than 100 people gathered in an Irish bar in Milton to celebrate van Koeverden’s victory Monday night. As the results were called, he told reporters that he was “just happy.”

“I’m just satisfied with the amount of work we’ve done. Hard work pays off,” he said. “We hit the ground. We talked to our neighbours. We asked them what they wanted. And they delivered.”

The decorated athlete and two-time Olympic flag bearer defeated the long-term incumbent in his first year in politics. 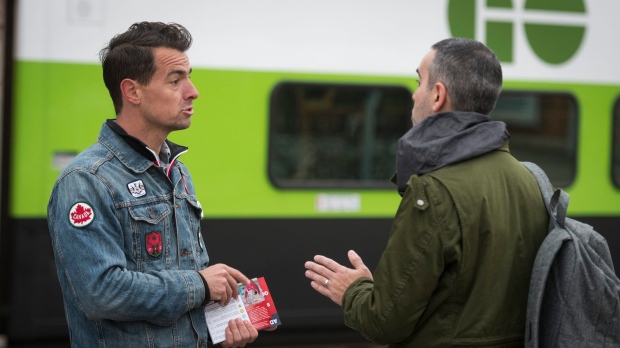 Raitt, who was appointed by Conservative Leader Andrew Scheer as the Deputy Leader of the Conservative Party of Canada, was first elected into the House of Commons when the riding was called Halton.

She has held various high-profile positions during her time as an MP, including minister of natural resources, minister of transportation and finance critic for the Official Opposition.

Van Koeverden told reporters that Raitt called him to congratulate him on his win.

Prior to entering politics, van Koeverden worked as a managing consultant with Deloitte and a broadcaster, writer and producer with CBC. He represented Canada at four Olympics, winning a gold medal, two silvers and a bronze in kayaking.

He is also an avid volunteer and has dedicated much of his time working for organizations like Right to Play, WaterAID, the Special Olympics, Parkinson’s Canada and the David Suzuki Foundation.

Van Koeverden said that his goal entering Parliament is to “keep listening.”

“I think there is a lot of talking in politics and there is not enough listening,” he said. “My ambition is to represent Milton first.”

Speaking to a crowd in Milton, Raitt thanked her team, her supporters, and Scheer for giving her the opportunity to become deputy leader of the party.

“I can tell you this, I am so lucky for having had the trust of Miltonians for the past 11 years. And I am so proud of what we’ve been able to accomplish together.”

When asked about her phone call to van Koeverden, Raitt said that she thanked him for a “great campaign.”

“I know that he’s going to go on and represent Milton in a way that will be respectful and give dignity to the home town.”