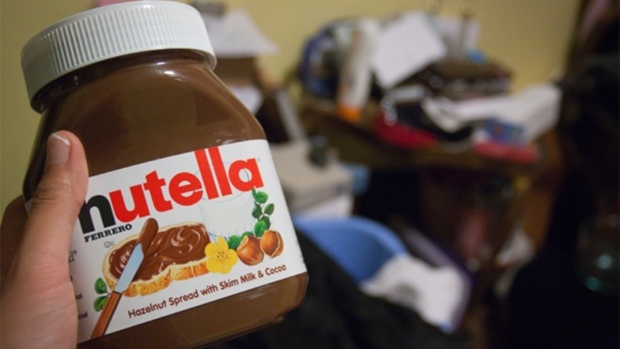 A Toronto-based grocery store is the latest to take a bite of the Nutella craze, opening a travelling pop-up kitchen that will serve up the sweet treat across the GTA. (AP)

A Toronto-based grocery store is the latest to take a bite of the Nutella craze, opening a travelling pop-up kitchen that will serve up the sweet treat across the GTA.

Fans of the chocolate and hazelnut spread can visit their nearest Longo's location to purchase warm crepes covered with Nutella, made fresh to order.

The travelling kitchen starts at Longo's Maple Leaf Square franchise on Thursday, and a full schedule of the stops is available online. The tour includes stops in Milton, Mississauga and Toronto.

Longo's promotion comes a month after Tim Hortons announced it would sell Nutella doughnuts, pastries and bagel spreads at locations across Canada. The products will only be available at the quintessential Canadian coffee shops until June 9.

"There are acceptable April Fool's jokes and then there's this," one person wrote on Twitter.

"Why on earth is Nutella being discontinued when people literally love the stuff. I'm having a breakdown," another wrote.

In November, a Toronto vending-machine company made headlines when it announced it would serve up Nutella baked goods in one of its touchscreen-enabled dispensers.

A pair of Canadian entrepreneurs impressed visitors to a New York technology fair in September with a 3-D printer that could produce the chocolatey treat ().

Last summer, fans of the spread panicked when hazelnut crops were damaged due to bad weather in Turkey, though luckily, prices never rose as a result.

A mother in California launched a lawsuit when she found out the product is not as healthy as she'd believed, saying she was "shocked" when she learned the spread was basically the equivalent of a candy bar melted into a jar. She said she'd believed the product was nutritious.