'Not leaving anyone behind': Volunteers deliver essentials to vulnerable during COVID-19

TORONTO -- When the COVID-19 pandemic began in mid-March, there were long lines and empty shelves at grocery stores. It was there that Mississauga, Ont. resident Tariq Syed recognized the challenges vulnerable members of society would likely face in the weeks to follow.

“I noticed the struggle the seniors were having in different aisles, trying to get their necessities, while everyone is panicking and it’s a chaotic scene,” Syed told CTV News Toronto. “And I was like, you know, these people don’t have any help.”

Syed wanted to change that. Right away, he created the Good Neighbour Project on Facebook, with a goal of connecting volunteers with seniors who need help getting their essentials, like food and medication. Word quickly spread about the group online.

In addition to helping seniors, Good Neighbour Project coordinates the delivery of essential items to people who are in self-isolation, persons with disabilities, someone who is pregnant, single parents and health care workers. The requests are made by phone after a call is placed to a hotline number.

“Our team picks up the phone, gets the information and then we post on Facebook,” explains Syed. “From there, we get volunteers and we assign them the task.”

One of those volunteers is Farrwa Urooj, who picks up groceries and delivers them within her Brampton neighbourhood.

“During pandemics, or during urgent situations, a lot of the time the elderly or the people who are vulnerable get disregarded,” Urooj said. “I was looking for ways to help a few people in my community where I live because they were not able to get access to food because they were scared they were going to catch something.”

Holding up the items she has purchased, including cereal, bananas and bread, Urooj says helping those in need is “basic humanity.”

“These are necessities. They’re staples that you need in one’s life,” she says.

“They’re people who understand the situation and are willing to step out from their comfort zone to do this,” he says. “We have people who reply within seconds and say ‘I will do, I will take care of it.’” 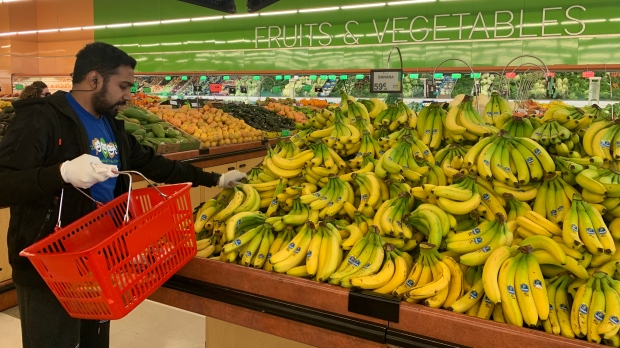 “Some of the [volunteers] we have met the last few weeks are some of the most incredible people I have known.”

And with the message to stay home resonating, Syed says the Good Neighbour Project will need more volunteers in the weeks and months to come.

“We know this is not going to be over anytime soon,” he said, adding that calls have started coming in from food banks asking for help delivering to their clientele.

“This is one of the amazing things about Canada and Toronto,” Syed said. “When something like this happens, how the community comes together to see that we are not leaving anyone behind in this crisis.”

You can find out more about Good Neighbour Project GTA here.