Vehicles in Toronto making excessive noise are being targeted by police in an attempt to crackdown on noise pollution.

The City of Toronto announced on Monday a blitz to target motorists who are operating vehicles without mufflers or who have modified their vehicles to make more noise.

Mayor John Tory said the new bylaws, that will allow police to more firmly target noise makers, were announced after the city conducted a review into street noise following complaints from residents.

“But the thing they have no understanding and no patience for, and I tend to agree with them, is noise that is caused by vehicles — especially people who are deliberately revving their engines and otherwise modifying their equipment to create an excessive level of noise that is disrupting the lives of people who are living in the city.”

"My wife has explained this many times to me as being simply an outcropping of the inadequacies that certain people feel -- mostly men -- who drive these cars around."

"I will go no further than that." 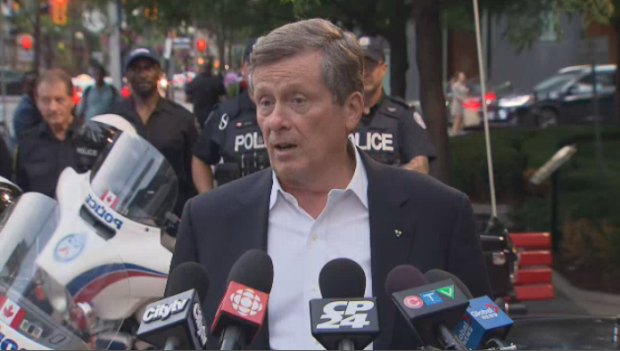 Tory said the new bylaw will come into effect on October 1, but police have the means to crack down on this type of behaviour immediately.

According to the World Health Organization, noise is an underestimated threat that can cause a number of short- and long-term health problems. Besides causing annoyance, research indicates the negative effects go further, including in the most extreme cases by damaging hearing.

"Excessive noise seriously harms human health and interferes with people's daily activities at school, at work, at home and during leisure time," the health organization says. "It can disturb sleep, cause cardiovascular and psychophysiological effects, reduce performance and provoke annoyance responses and changes in social behaviour."

During the week of June 29 to July 5, police handed out 44 noise tickets across the city. Last year, officers issued 281 citations for having an improper muffler, 319 due to alarms or sirens, 417 for revving engines or squealing tires, and another 76 under municipal noise-bylaw enforcement, police said.

The city is also considering using the audio equivalent of red-light cameras, Tory said, such as those used in Edmonton to crack down on noise scofflaws.

Toronto's bylaw essentially bars anyone from making a noise likely to disturb the quiet, peace, rest, enjoyment, comfort or convenience of others. Notwithstanding, the number of complaints reached 12,974 last year, up from 11,297 in 2015, according to city figures.

Rod Jones, with bylaw enforcement, said the officers would be working an increased schedule of 20 hours a day "to be able to be there when the noise is happening." Construction noise and emergency vehicle sirens are not part of the blitz.

Under the new campaign, about two dozen bylaw officers and police began an "awareness and enforcement action" late Monday in Yorkville, one of the city's toniest areas. Health authorities note the less well off may be most at risk.

"The less affluent, who cannot afford to live in quiet residential areas or have adequately insulated homes, are likely to suffer disproportionately," the World Health Organization says.