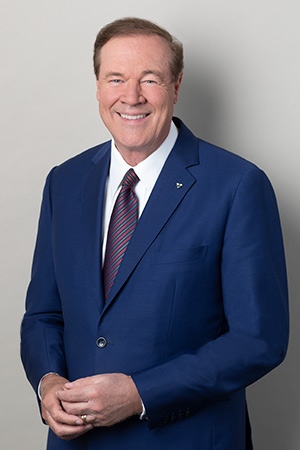 Ken Shaw brings not only a wealth of journalistic experience to his role at CTV News, but also an exceptional record of community service. From April 2001 to January 2020, he served as Co-Anchor of Toronto’s most-watched local newscasts – CTV News at Noon and CTV News at Six.

Shaw announced at the end of 2019 that he would retire from the anchor desk at CTV Toronto, but would remain with CTV News to provide special reports.

Shaw joined CTV Toronto as a reporter in 1979, while at the same time reporting on major Canadian news stories for American network news programs including ABC's Good Morning America and Nighline, and NBC’s The Today Show. He was named anchor of the 11:30 p.m. newscast at CTV in 1981, and was named the station’s National Editor in 1998. From 1999 to 2001, Shaw became familiar to viewers across Canada as the Weekday Anchor for CTV News Channel.

Shaw made his first foray into broadcasting in 1972 when he became a technical trainee for Baton Broadcasting, which today is known as CTV News. From these humble beginnings, he became a co-writer and actor for the sitcom SHH! IT’S THE NEWS. On March 31, 1981, Shaw conducted a special report about gun control in Canada that led ABC’s Nightline. The story aired the day after the assassination attempt on U.S. president Ronald Reagan.

As a reporter, Shaw was on the ground to cover many significant breaking news stories, including being the first television reporter on scene of the Mississauga train derailment and subsequent evacuation in 1979; reporting from New York after the shooting death of John Lennon in 1980; and covering the evacuation of Northern Ontario communities due to forest fires in 1980.

Off-air, Shaw devotes a great deal of time and energy to various local charities and community events, and has served as emcee for more than 1000 community and charitable events over the years. Shaw is an Honorary Chief of the Toronto Police Service, and a past director of Variety Village; the Empire Club of Canada; the Ronald McDonald House Charities of Canada; ProAction Cops & Kids; The Duke of Edinburgh Awards; and The Hinks Dellcrest Centre.

An avid golfer, Shaw and his wife Nancy host the annual “Nancy and Ken Shaw Charity Golf Tournament”, raising funds for Providence Healthcare. Shaw also served as chair of the Abilities Centre, as the organization worked to build the 125,000-square-foot "Centre of Excellence" in Whitby, Ont., to assist people of all ages with special needs. The Centre officially opened in May 2012.

In 2010, Shaw received the Order of Ontario for his track record of excellence in volunteer service in the Greater Toronto Area, as well as the Legends Recognition Award from the City of Oshawa, an award for outstanding positive impacts on the Oshawa community. In 2008, Shaw was presented with the Gold Ribbon Award by the Canadian Association of Broadcasters.

In 2012, Shaw received an honourary Doctor of Laws from the University of Ontario Institute of Technology.

He speaks English and a bit of French.