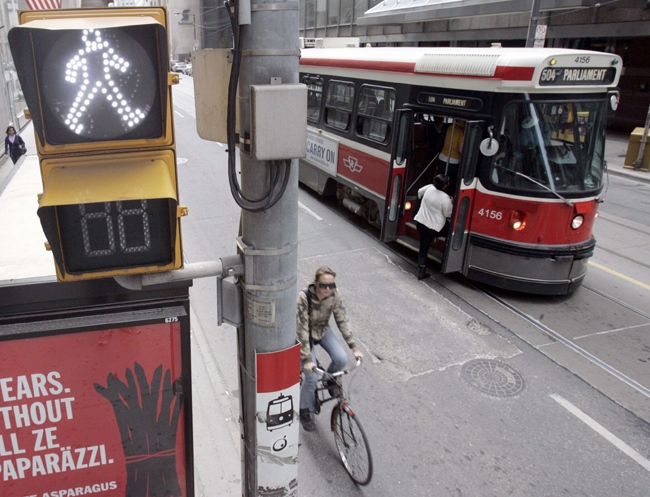 A TTC streetcar takes on passengers as a cyclist rolls past a pedestrian walk sign in downtown Toronto, Sunday, April 20, 2008. (J.P. Moczulski / THE CANADIAN PRESS)

TORONTO - Premier Dalton McGuinty says the province won't be able to hammer out a long-term funding deal for the Toronto Transit Commission by the end of the year.

McGuinty says he's aware Toronto Mayor David Miller is hoping for a deal this year, and while that's not going to happen he promised to continue discussions about funding.

TTC funding is an ongoing issue, McGuinty says, and acknowledged Miller has a good point when he says Toronto can't afford the investments on its own.

McGuinty notes his government has provided special support in the past but, for now, it has done all it can given its own financial constraints.

McGuinty says the city will have to find a way to deal with those challenges just like the province has.

The Liberals have already come under fire for delaying $4 billion in funding for some major public transit projects in Toronto in last month's budget, which forecast a $21.3-billion deficit.