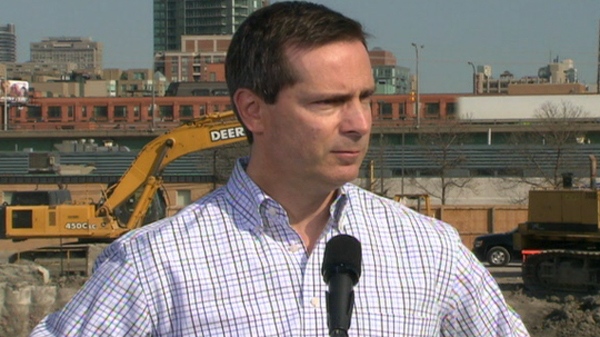 Conservatives groups who are mounting a campaign to get rid of the revised program, which will see lessons taught as early as Grade 1, are accusing the government of corrupting young minds with sexually explicit material.

Kids will learn about such topics anyway, whether it's from their friends or the Internet, McGuinty countered.

By making it part of the curriculum, children will get the information in a venue "over which we have some control," he argued.

But the self-described "family focused" groups say the material is "bordering on criminal."

"Now, most adults do not question their gender identity. But we're now going to teach little Johnny to say, 'Well, I'm male on the outside, but maybe I'm a girl on the inside,"' McVety said.

"This is unconscionable to confuse an eight-year-old's mind with this type of indoctrination of a special-interest agenda."

McVety said he doesn't object to sex education per se and believes that schools should teach about the "perils of promiscuity" and sexually transmitted diseases. But it should be parents who decide how they want to deal with sexually explicit topics, he said.

"Somehow the parent is left out of the equation," he said. "We are set aside as if we are irrelevant and the mighty state knows all."

If parents object to the material, they can have their children sit out the class, said Education Minister Leona Dombrowsky.

"I'm not a teacher, but we have worked together very hard with experts to understand best what age-appropriate language and topics are," she added.

But it's impossible for kids to avoid sex ed topics that have been woven into Ontario's 200-page curriculum, McVety countered.

"Did she teach her eight year olds to question their sexual identity in Grade 3?" he said.

"I don't think so, but she wants to do it to my children and other children across this province."

The groups, which claim to comprise more than 100,000 active members, are planning a rally May 10 -- right after Mother's Day -- to protest the curriculum.

Under the revised curriculum released in January, Grade 1 kids will be taught to identify genitalia -- among other body parts -- using the correct word, such as penis, vagina and testicle. The 1998 curriculum made no mention of genitalia.

Grade 3 lessons about the differences that make each person unique will now also include discussion about same-sex families and students with special needs to "reflect the government commitment to equity and inclusive education," according to provincial officials.

In Grade 5, kids will be taught to identify parts of the reproductive system and describe how the body changes during puberty. In Grade 7, they're taught how to prevent unintended pregnancy and sexually transmitted infections, including HIV.