Maple Leaf Foods to invest in new London plant, but will close 3 others 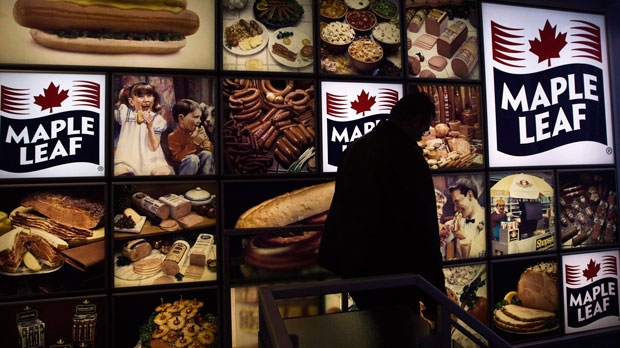 LONDON, Ont. -- Maple Leaf Foods Inc. is building a $660-million fresh-poultry facility in London, Ont., that will enhance its ability to process higher-margin products by closing three aging plants in the province.

It will lead to a net reduction of about 300 jobs.

The new facility will span nearly 60,000 square metres and employ 1,450 full- and part-time workers once operations begin, which is expected in the second quarter of 2021. Construction will begin this spring.

"It will solidify and strengthen the poultry industry in Canada for the next many, many decades," Maple Leaf CEO Michael McCain said in a conference call after markets closed Monday.

Chicken is the most consumed and fastest growing meat protein in Canada.

McCain said the plant is the largest single-site investment ever made in the Canadian food sector. Production from three of Maple Leaf's other plants will eventually be consolidated into the new facility, the company said.

Its St. Marys plant is expected to close by late 2021 and its Toronto and Brampton facilities will close by in mid- to late-2022.

"These plants have served us well but they're now 50 to 60 years old and severely growth constrained because of location, footprint or infrastructure and nearing the end of their productive capacity," McCain told analysts.

McCain said he "deeply" regrets the impact on existing employees, but the plant will allow it to earn and extra $105 million in adjusted EBITDA (earnings before interest, taxes, depreciation and amortization) annually by delivering higher margin valued-added air-chilled, tray-packed boneless and ground poultry. It will also help to expand its retail brand and supply fresh chicken to two other facilities that make cooked and sliced meat.

The new plant, to be located near Highway 401, will deliver more than 30 per cent cost savings from lower labour, overhead and distribution and a one-third increase in capacity that can expand to meet growing demand.

"This is going to be, to the very best of our knowledge, the single most technologically advanced facility of its kind in the world."

The company plans to provide affected employees with job opportunities at the new facility or other plants it operates, he said, as well as services to help them eventually find new employment.

"Canada's agri-food industry is a key driver of innovation and well-paying jobs across the country," added Agriculture and Agri-Food Minister Lawrence MacAulay.

London is a significant food and beverage processing hub, with more than 60 companies employing more than 7,000 people at businesses including Labatt, McCormick, Dr. Oetker and Nestle.

Established in 1991, Maple Leaf Foods employs more than 11,000 people across Canada and exports to more than 20 global markets.