Man cut, bruised after he protects child from falling construction fence near Hospital for Sick Children 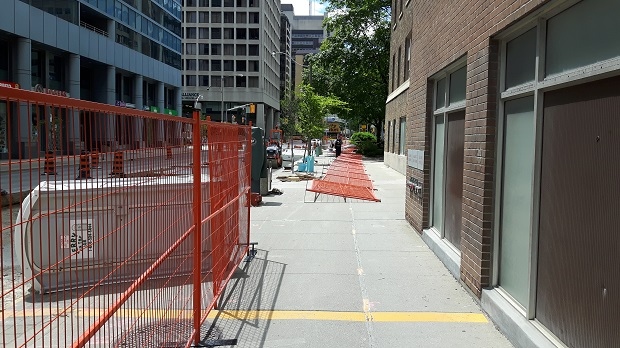 An orange fence that has fallen over can be seen down the street in downtown Toronto near the Hospital for Sick Children.

A construction fence fell down on a man while he was trying to protect his child in downtown Toronto on Sunday afternoon, according to police.

Cst. Jen Sidhu, spokesperson for Toronto police, said a call came in around 12:20 p.m. after the fence fell on the man in the Elm Street and University Avenue area. The fence was not secure because it wasn’t being held down by a sand bag.

Sidhu said the father suffered minor injuries, like cuts and bruises, but his child -- a Sick Kids patient -- was unharmed.

Initially, Sidhu said, police were investigating, but Sick Kids security has taken over and are doing the paperwork.