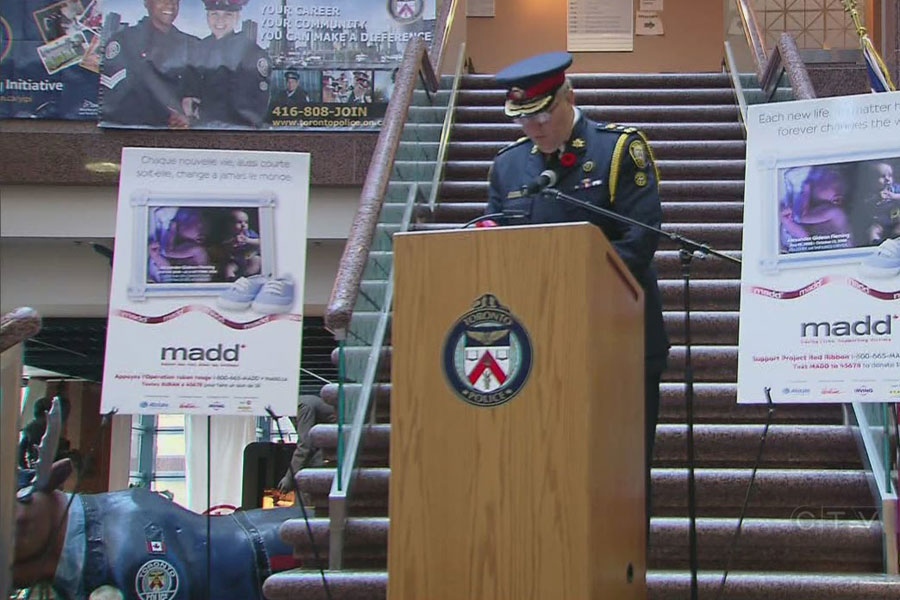 Mothers Against Drunk Driving launched their annual safety campaign on Tuesday that they hope will reduce impairment-related accidents.

The annual Project Red Ribbon campaign asks Canadians to wear a red ribbon during the holiday season as a sign of their commitment to sober driving.

At the launch, which was also attended by Toronto Police Chief Bill Blair, Ontario Minister of Transportation Glen Murray said he hoped the upcoming holiday season would give Ontarians a good reason to think twice before they drink and drive.

"As we approach Christmas, which is a time when people get together, celebrate family and cherish our loved ones, there seems to be no more important message. There’s no gift you could give at Christmas, that would be a substitute for a lost person," Murray said.

Starting this week, volunteers from MADD will be handing out millions of red ribbons across Canada that can be pinned on cars, key chains, wallets and backpacks.

The ribbons also serve as a tribute to victims of impaired driving accidents.

Everilda Ratnakumar, president of MADD Toronto, said she hopes the national campaign will serve as a helpful reminder to all drivers.

"We want our red ribbons to be seen everywhere to remind people that it is never acceptable to drive impaired," Ratnakumar said at the conference."We need to drive home the message that impaired driving can be prevented if everyone makes good, responsible, safe choices," Ratnakumar added.

According to MADD, nearly 1,250 to 1,500 Canadians are killed each year in impairment-related crashes.