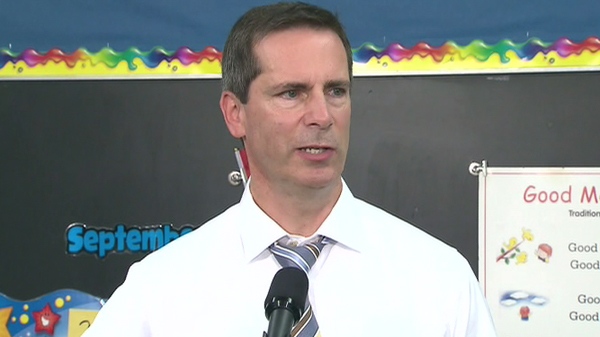 TORONTO -- Ontario's opposition parties are determined to take advantage of a summer of missteps and policy reversals by the Liberal government as politicians return to the legislature Monday.

The Liberals came under heavy fire for passing a law in secret regarding police powers during the G20 summit in Toronto, and have been facing a growing backlash against their green energy plans from people opposed to living near wind turbines and solar farms.

The government was forced to retreat on unpopular eco-fees that were slapped on hundreds of products without notice on Canada Day, the same day the 13 per cent HST went into effect, adding eight per cent to gasoline, electricity and home heating bills.

Premier Dalton McGuinty also did a couple of policy flip-flops during the summer, allowing mixed martial arts fights in Ontario -- something he'd always said was not a priority -- and agreeing to let Ontario Lottery and Gaming get into online gambling.

The opposition parties say the Liberal government has grown tired and is floundering in the last year of its second term. It deserves to be defeated for increasing everyone's cost of living with the HST and expensive green energy projects, they say.

With a provincial election just over a year away, in October 2011, all three parties are working on their campaign strategies.

"I think the ballot question is all about how life has become more unaffordable for average families in our province," said Progressive Conservative Leader Tim Hudak.

"They can't afford this government any longer."

The New Democrats say the Liberals are an "out of touch government" that failed to help create good paying jobs and still spends far too much on consulting firms instead of rooting out waste.

"I think that the government has made some very poor choices in terms of how they've invested or spent our tax dollars... everything from the bloated CEO salaries to their addiction to consultants," said NDP Leader Andrea Horwath.

There's little doubt the fall session will see more partisan fighting as the election draws closer, but the Liberals will focus on governing and on economic improvement, said McGuinty.

"I think one of the things we want to do is keep a very close eye on the economy given the unusual uncertainty associated with prospects here and throughout North America," he said.

"And also to keep a close eye on the micro-economies, what's happening in our households, what's their state of uncertainty when it comes to their own jobs and their own futures."

It's clear the Liberals are worried about their chances of winning an unprecedented third straight majority, dispatching Transportation Minister Kathleen Wynne to remind people about Hudak's history in the previous Mike Harris Tory government.

"He was part of a government that dismantled what I understood Ontario was about, and we've been in the process for the last seven years of rebuilding," said Wynne.

"I think what you'll see from Tim Hudak is an attempt to tap into the worst in people, into the mean streak in people. We've seen that movie; we don't need it again."

The only piece of new government legislation planned this fall will be aimed at pension reform, while the Liberals move to implement previously announced programs like all-day kindergarten and a new $50 tax credit for parents.