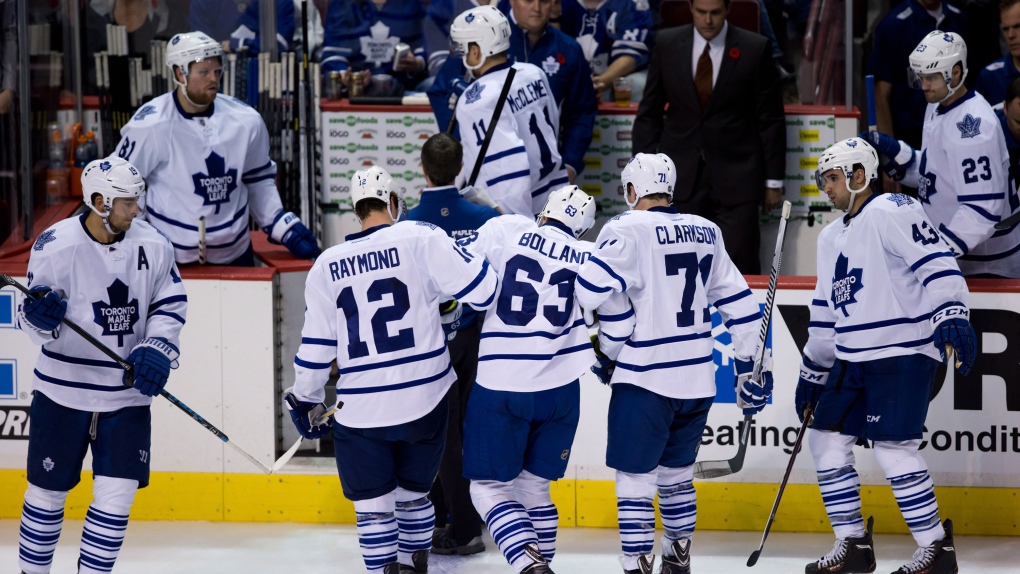 VANCOUVER -- The list of Toronto Maple Leaf injuries grew Saturday when centre Dave Bolland was taken to hospital for surgery after suffering a cut on his left leg.

Bolland was hurt early in the second period of Toronto's 4-0 loss to the Vancouver Canucks when he was taken into the boards by Zack Kassian.

Kassian's skate appeared to hit the back of Bolland's leg. The 27-year-old from Mimico, Ont., instantly crumpled to the ice. He was attempting to get back on his feet when Kassian scored the game's second goal. Bolland had to be helped to the bench by teammates.

Toronto coach Randy Carlyle could offer few details but compared Bolland's injury to the one suffered last year by Erik Karlsson of the Ottawa Senators. Karlsson missed 10 weeks when his Achilles tendon was partially sliced while being checked into the boards by Matt Cooke of the Pittsburgh Penguins.

"He suffered a cut similar to the Karlsson injury," said Carlyle. "I don't know the severity or which tendon, but he did suffer a cut into that area."

Moments after Carlyle spoke to reporters Bolland hobbled out of the Toronto dressing room on crutches. He was loaded onto a stretcher to be taken to hospital.

"I haven't really saw it," Carlyle said of the play. "I know Kassian went into finish his check. I can't comment other than that."

Kassian said it was a clean hit.

"I haven't seen it again, or really looked," he said. "I just went in to finish my hit. I am not sure what even happened to him.

"I went in there hard to finish my hit, I don't know what happened but it was a clean hit. I know it was clean so no talking about that."

"Losing a guy like that, he's been real solid for us, probably one of our best players for the last couple of games," said Reimer, who faced 47 shots in the loss. "It's real tough to lose him but having said that, as a team we have to find a way to rally around him and play well for him and try to win one for him."

Bolland came to the Leafs this year in a trade from Chicago. In 15 games he has six goals and four assists.