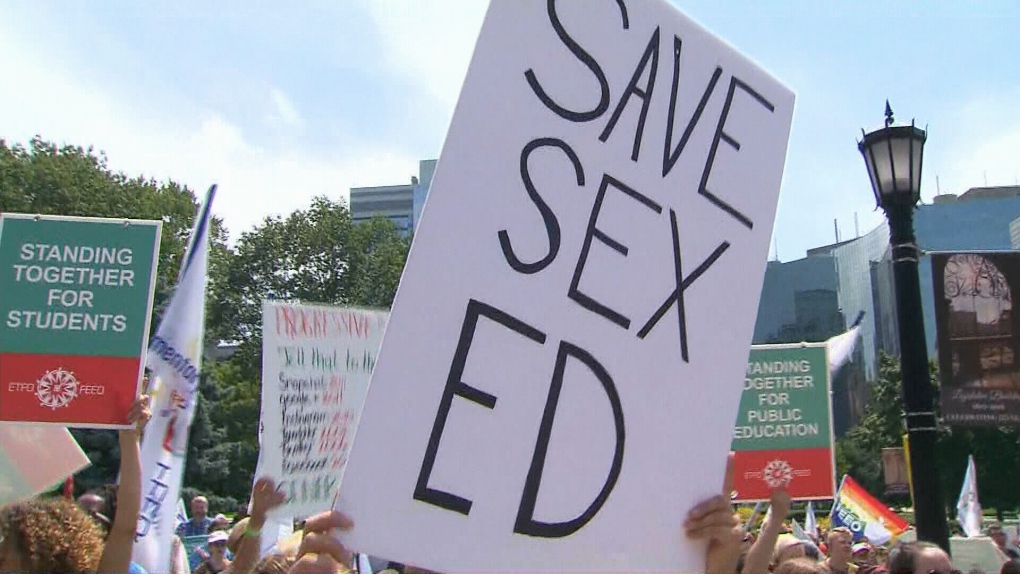 A person holding a sign protesting the repeal of the sex-education curriculum is seen.

TORONTO -- Lawyers for a transgender girl fighting the Ontario government's repeal of a modernized sex-ed curriculum say the document should be reinstated to protect their 11-year-old client and other LGBTQ students from discrimination, at least until a new lesson plan is developed.

In closing arguments Thursday at the province's human rights tribunal, the legal team said the government was putting the sixth-grader identified only as AB at a disadvantage by not having mandatory gender identity lessons in the current temporary curriculum.

The case before the tribunal was launched in August and focuses on the impact of the curriculum repeal on LGBTQ students.

An interim curriculum based on a version from 1998 is in place while a new lesson plan is under development.

McCann said the government's actions, specifically excluding references to gender identity in the interim curriculum, increased the risk of AB being bullied.

"This sends a message that trans people don't exist," he said.

McCann said the tribunal should order the government to ensure any new curriculum is compliant with Ontario's human rights code.

Lawyers for the Ontario government have argued that the interim curriculum introduced last fall does not discriminate against students, saying teachers can expand on what's required by the document.

Teachers make their own lesson plans, the province's lawyers have noted, and language in the introduction of the curriculum opens the door for them to discuss LGBTQ issues.

On Thursday, lawyers for the Ontario Human Rights Commission, an intervener in the case, also asked the tribunal to order the government to reinstate the modernized curriculum while a new one is developed.

They argued that the government has discriminated against AB by "erasing" mandatory references to LGBTQ people from the curriculum. Unless that material is included, it does not guarantee that teachers will tackle the subject in their classrooms.

"AB has been made to feel less worthy of recognition and value," said lawyer Reema Khawja.

The commission isn't seeking to "entrench" the 2015 curriculum as the province's permanent sex education lesson plan, but the curriculum must comply with the Ontario's human rights code, Khawja said.

The tribunal should order the government to include lessons on gender identity, gender expression, sexual orientation and consent in any future sex education curriculum, she said. That order would ensure that whatever lesson plan the Ontario government eventually develops does not discriminate against AB and other LGBTQ students, she said.

"AB should not have to start all over again if that curriculum is not (human rights) code compliant," she said.

The tribunal is expected to decide on the case in the spring.

The repeal of the modernized curriculum is also being fought in a separate court challenge.