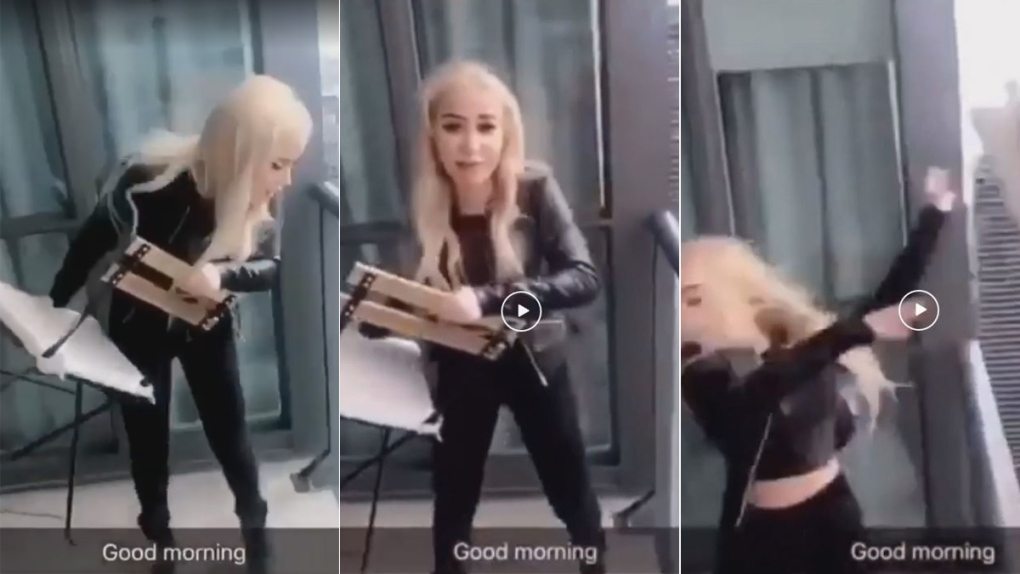 In this composite of images from video, a woman is seen throwing a chair from a balcony in downtown Toronto. (source: Facebook / Lisa Calderon)

A 19-year-old woman who allegedly hurled chairs and other objects off a condo tower balcony last month has lost friends and her place in a dental hygiene program since the incident, her lawyer said after a brief court appearance on her behalf Friday morning.

“She’s been expelled from her school and she wished that this never happened,” Gregory Leslie told reporters. “It’s very unfortunate that this happened but it’s been a hard lesson.”

Police allege Marcella Zoia threw two chairs and other items over the balcony of a condo many stories above ground on the morning of Feb. 9, while a friend or acquaintance filmed part of the act and posted it to social media.

The items fell to the ground near an entrance to the building at Harbour and York streets and luckily no one was injured by them.

She turned herself in to police four days later and was charged with mischief endangering life, mischief – damage to property over $5,000 and common nuisance.

She was released on $2,000 bail and ordered to reside with her mother and avoid the upper floors of tall buildings.

Leslie said his client was in school for dental hygiene at the time of the incident and was wrongly expelled in his opinion.

“There’s always the presumption of innocence. For a young lady to make a mistake and then be expelled from school, I think it’s absolutely inappropriate. I’m actually looking into that and hopefully we’ll have her back in school in a month or two.”

He said his client, who has garnered more than 14,000 followers on Instagram after the incident, has been “keeping low.”

“She wants this matter to be over with,” he said, adding that his client wanted to avoid a trial.

If the crown tasked with the case seeks jail time as a punishment, Leslie said the matter will be forced to trial.

He said Zoia has had problems in her personal life since the incident.

“Well it’s been extremely embarrassing, I think she’s lost a lot of her friends, it’s created problems between her and her mom, they’ve worked that out though.”

The incident generated significant interest in the local media and also attracted memes and ridicule by the public.

Leslie said police have contacted another person of interest in the case since Zoia was arrested and charged but he is not aware whether the investigation has progressed any further.

He said Zoia will be receiving counselling as a part of her efforts to resolve the matter.

Leslie said he will return next to court on April 26 and that the matter could take “three or four months.”