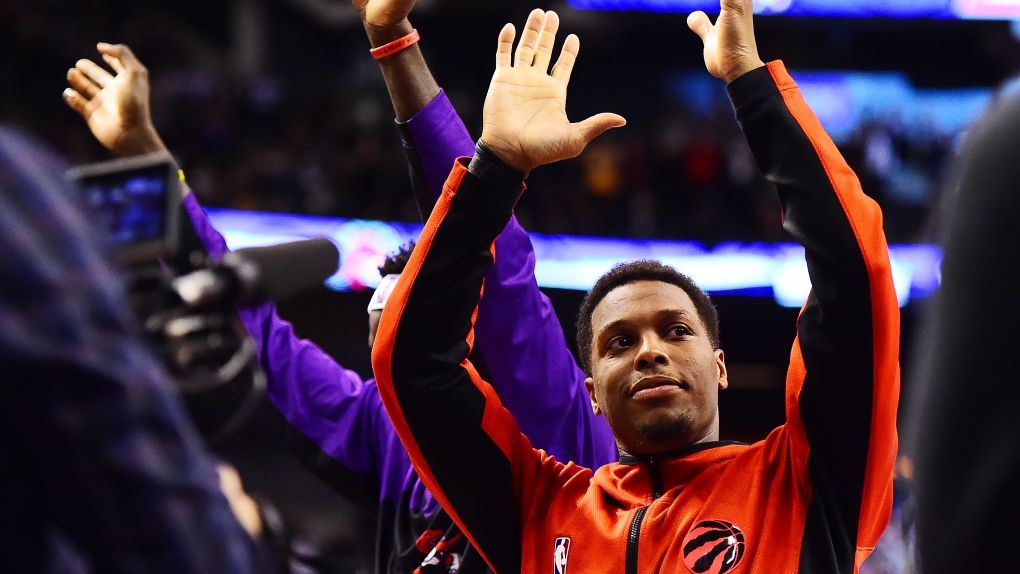 Toronto Raptors guard Kyle Lowry acknowledges the crowd as they cheer after him becoming the all-time franchise leader in assists during the second half of NBA basketball action against the Atlanta Hawks in Toronto on Tuesday, January 28, 2020. THE CANADIAN PRESS/Frank Gunn

TAMPA, FLA -- When asked about his highlight of a crazy NBA season, Kyle Lowry rattled off a laundry list of virtually every player on the Toronto Raptors and their high notes.

From all-star Pascal Siakam to newcomer Khem Birch to youngsters Malachi Flynn, Freddie Gillespie and Jalen Harris, Lowry had kind words for them all.

He didn't mention himself.

If Lowry leaves the Raptors this summer, he'll go as perhaps the team's greatest leader, evolving from a disgruntled player who had zero desire to be a Raptor, into the team's heart and soul, a father of two sons, and figurative father to an entire team.

"I think he's the best leader I've ever had as a teammate," said Yuta Watanabe. "He's always teaching us, he's always talking."

Birch said of Lowry's leadership: "I've never seen anything like it."

Lowry, who becomes an unrestricted free agent on Aug. 2, will leave a huge hole in Toronto sports should he leave. The 35-year-old gave no clues on Tuesday regarding his future, except to say he's not leaving the game any time soon.

"To be honest with you, my family will be a major factor in this," said Lowry, whose two sons Karter and Kameron have grown up in Toronto. "And also money talks and years talk, let's be real . . . I still have a lot more to give. I have a ton of basketball left in me."

"We'll see what happens," he said. "Of course, Toronto is always going to be home. It's a situation I would love to be in and if it works out, it works out. If not then we make choices on what's best for myself and my family."

Lowry met with the media virtually for 45 minutes on Tuesday, two days after the end of a crazy Raptors season that saw the team nosedive down the standings during a COVID-19 outbreak in March. They missed the playoffs for the first time in eight years.

Lowry was in a jovial mood, teasing one reporter about his unkempt hair, poking fun at another about his golf game. He demanded everyone turn on their cameras.

The future of team president Masai Ujiri is also a question mark -- the 50-year-old has yet to sign a contract extension. Ujiri and Lowry are the two faces of the franchise; inextricably tied, it's tough to imagine one without the other.

"He didn't trade for me, but he is the one who paid me to stay twice and gave me the opportunity to continue to lead. He has helped me become a better person, a better basketball player. His decision is based on him and I want him to be happy whatever he decides."

In his 15 seasons in the NBA, with stints in Memphis, Houston and Toronto, Lowry has earned a reputation as one of the game's hardest workers. He's made taking a charge into an art form, landing on his backside night in and night out.

But Lowry said sports stars such as NFL quarterback Tom Brady, who's 43, and WNBA legends Sue Bird (40) and Diana Taurasi (38) are proof that athletes are aging better than ever. He points both to technology and improved diets and more care around body maintenance by athletes.

Lowry averaged 17.2 points, 7.3 assists and 5.4 rebounds in his 46 games this season. His best game was a 37-point, 11-assist performance in a win over the Los Angeles Lakers on May 3. It was an entertaining night that saw Lowry yapping at a mouthy Lakers fan. It also was the last game he played this season.

Lowry caused great angst amid Raptors fans back at the trade deadline. Many felt he was definitely out the door. But rather than ask for a trade to a playoff contender, he said he "made a commitment" and stuck by it.

"I started the season off and said I wanted to be with these guys . . . I'm a man of my word. And I trust the decision making of (general manager Bobby Webster) and Masai and they decided not to do it. There was open communication.

"I'm not that guy. I said something in January and I stuck with it. Those guys had the final decision and they made the call not to (trade me). I roll with what they've done the last eight years. I mean I haven't been happy about all the things they've done but I roll with it."

Lowry, who was excellent in the Raptors' historic championship run two years ago, made it clear he's keen to hoist the Larry O'Brien Trophy again.

"I want more championships," Lowry said. "That's always been the goal. Money comes with that but championships are why I play."

Free agency isn't the only significant decision he'll made in the next few weeks. The guard, who won gold with Team USA at the 2016 Rio Olympics, is in the player pool for this summer's Tokyo Games.

"I want to represent my country and get another gold medal, (but) me and my internal team will talk about that and see what's the best decision," he said. "But to be able to go out there and represent the country and possibly win a gold medal is always high on the list."

"Thank you. Thank you," Lowry said, then launched into a long answer. "I know this year hasn't been . . . what (fans) are used to. But we played our butts off every opportunity that we could.

"There's not a day that goes by that we (don't) say, 'Man, I wish we were in Scotiabank (Arena) playing in front of our fans.' There's not a day that went by that we didn't wish we were riding down University or coming off the DVP or the Gardiner, going into our home building. . . (or) practising at our own practice facility. There wasn't a day where we didn't wish that we were coming out of a home tunnel, and our fans standing up there, signing autographs. There wasn't one day where we didn't think about Jurassic Park.

This report by The Canadian Press was first published May 18, 2021.