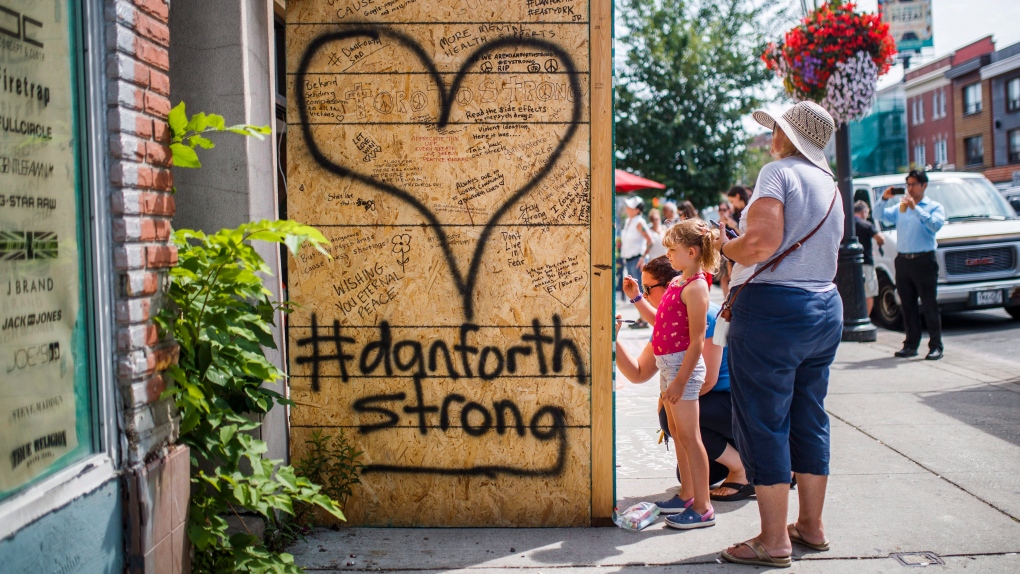 People write messages on a makeshift memorial remembering the victims of a shooting on Sunday evening on Danforth Avenue, in Toronto on Tuesday, July 24, 2018. THE CANADIAN PRESS/Mark Blinch

Kijiji says it has removed a number of ads hawking concert tickets for the Danforth shooting benefit concert at “multiple times” their face value.

Resale ads for tickets to the Danforth Strong concert started popping up the Kijiji Ontario webpage shortly after they went on sale – and promptly sold out -- on August 1.

Tickets to the charity show were initially being sold for $50 each.

On Kijiji last week, a handful of sellers were asking for $200 a ticket and more than $400 for a pair.

The classified advertising site told CP24 in an email Wednesday that the ads have “prompted them to revisit” their policy regarding ticket sales.

As a result, they have removed all ads for tickets to the event.

“Upon reflection, along with feedback from our members, it quickly became clear that allowing this kind of transaction runs counter to the spirit of community which Kijiji is all about,” a spokesperson said.

“As a result, we are making changes. Kijiji will no longer accept ads for the resale of tickets to fundraising events where all proceeds are being donated to a charitable cause or relief effort.”

As of Wednesday, neither StubHub nor SeatGeek, two other popular ticket resale services, showed ads for resale tickets to the Danforth Strong show.

The show will be held at the Danforth Music Hall, during the annual Taste of Danforth street festival, on August 11 and will be hosted by Canadian rockers Billy Talent among other artists.

Proceeds from the concert will be donated to the Toronto Strong Fund and will be distributed to the families whose lives were shattered when a lone gunman opened fire on unsuspecting pedestrians and restaurant-goers on July 22.

An 18-year-old woman and 10-year-old girl were killed and 13 others suffered varying injuries.

The fund is organized in collaboration with the City of Toronto and Toronto Foundation. It was first founded in April as a way to help support those killed and injured in the Toronto van attack.