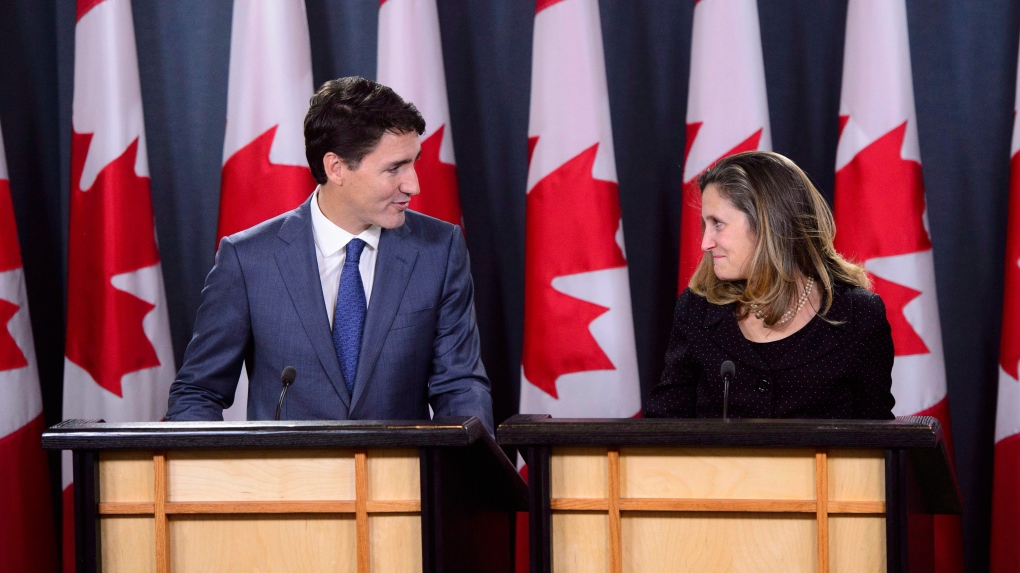 OTTAWA -- After more than a year of talks, Canada finalized a revamped free-trade deal with the United States and Mexico. The new deal, dubbed the U.S.-Mexico-Canada Agreement, or USMCA, will replace the North American Free Trade Agreement. Here are some key elements of the new deal:

GETTING MILKED: Trump frequently railed against Canada's dairy industry throughout the trade talks, calling it unfair to the United States. The new deal grants the U.S. access to 3.6 per cent of the Canadian dairy market, a move roundly criticized by domestic dairy farmers. The access given to the U.S. is slightly more than the 3.25 per cent conceded in the Trans-Pacific Partnership trade deal with Pacific Rim countries. Aside from new quotas on American ice cream, there will also be increases in access for American poultry and eggs, in exchange for greater access south for Canadian peanuts and sugar.

TARIFFS AND TAUNTS: Trump joked that the deal wouldn't have been made without tariffs, specifically on Canadian-made steel and aluminum, which prompted tit-for-tat retaliatory tariffs from Canada on a number of U.S. goods. And as negotiations dragged on, Trump threatened to slap Canada's auto industry with significant tariffs -- a threat apparently now dodged. The deal says the first 2.6 million Canadian autos exported to the U.S. will be exempted from tariffs, a figure well above the current export rate of 1.8 million. But the steel tariffs remain in place and Trump has given no indication when he might lift them.

ATTENTION SHOPPERS: The trade deal raises the threshold for duty-free purchases online from American retailers. When the deal takes effect, shoppers won't pay duties until their online purchase is worth more than $150 -- a significant bump from the current threshold of $20. But there's more: Language in the agreement no longer requires companies -- such as Google or Microsoft, for example -- to put a data centre in Canada in order to do business here, meaning Canadians' information could be housed south of the border and subject to American laws.

INTELLECTUAL PROPERTY: The rules around copyright and intellectual property are set to change. On copyright, the length of time after a creator's death that they maintain rights will move to 70 years from 50. On pharmaceuticals, new biologics -- drugs made from natural sources -- will be copyright protected for 10 years, up from the current eight, an extension that analysts believe will benefit U.S. companies over Canadian firms and delay when Canadian patients can access cheaper, generic versions of drugs.

RESOLVING QUARRELS: Two of Ottawa's key sticking points throughout the talks involved holding on to dispute-resolution tools and decades-old cultural exemptions that leave Canada in control of its own media content, from broadcasting to publishing to music. The USMCA preserves what was known as Chapter 19, which allows independent panels to resolve disputes over tariffs and duties, as well as Chapter 20, the government-to-government dispute-settlement mechanism. Chapter 11, which allows companies to sue governments over perceived mistreatment, has been dumped.

TURNOVER ON DOWNS: The National Football League and Bell Media lost their 2017 legal challenges to sack a CRTC decision that banned the long-time practice of Canadian advertisers inserting their ads into Super Bowl broadcasts over the more popular American ones. They now appear to have a win. The University of Ottawa's Michael Geist points out on his blog that wording in the new trade deal would see Canada "rescind the CRTC policy with a requirement that all programs be treated equally." Result? American ads could be punted from Canadian airwaves during the big game. It was one of many cultural issues in the deal, but the language around a decades-old cultural exemption remains in place, leaving Canada in control of its own media content, from broadcasting to publishing to music.

INDIGENOUS RIGHTS: The Liberals pushed inclusion of a new chapter on Indigenous rights in the trade deal. In the end, the chapter turned into provisions sprinkled through the text, including one allowing governments to enact measures needed to meet their legal obligations to Indigenous Peoples. Similarly, a gender chapter didn't materialize as originally envisioned.

TRADING PLACES: There is also language in the deal that requires any of the three partners to notify the others when they start or finish trade agreement talks with a non-market economy -- like China -- and gives the other partners a say in the text of that deal. While this language is new, the list of professions that can more easily enter another partner country on a temporary basis hasn't been updated to include, for instance, many tech jobs.