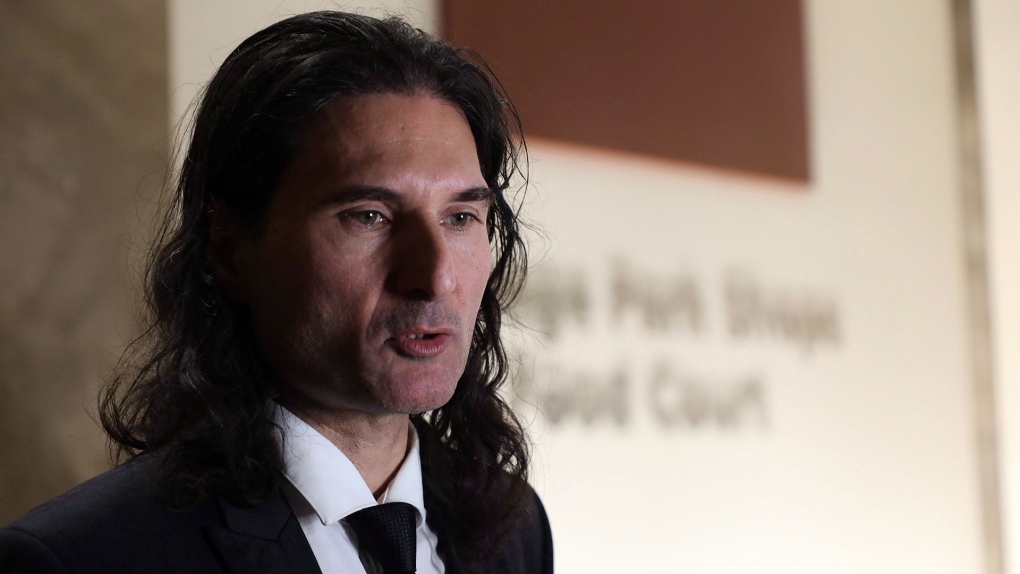 James Sears, editor in chief of "Your Ward News," is seen outside Ontario court in Toronto on Wednesday, Nov. 28, 2018. Sears is charged with willfully promoting hatred of women and Jews. THE CANADIAN PRESS/Colin Perkel

A Toronto editor found guilty in January of promoting hatred against women and Jews was given more time on Thursday to say why he believes his lawyer threw the case.

In addition, Ontario court Judge Richard Blouin gave James Sears, who is looking to reopen his trial, two weeks to come up with a list of proposed witnesses and a summary of what evidence they might offer.

"I've never done or seen one of these applications," Blouin said of the bid to reopen the trial. "It's an unusual procedure. One we're all working our way through."

Blouin also put off sentencing for LeRoy St. Germaine, 77, publisher of Your Ward News, who was found guilty along with Sears.

The judge has been pressing St. Germaine, who has Metis background, to agree to a sentencing circle -- a form of mediation in which a wrongdoer engages with their victims, in this case women and members of the Jewish community.

St. Germaine's lawyer suggested his client was open to the concept -- but not if he had to go into the mediation with apologies up front.

"The whole terms of reference might be a sticking point," Blouin acknowledged. "(But) skilled facilitators have a way of getting to things over time."

Blouin was insistent that a facilitated discussion of strongly opposed views in a "controlled, thoughtful arena" would be a good thing. He gave until Aug. 22 to come up with a plan or, he said, he would simply continue with sentencing St. Germaine.

For his part, Sears, 55, failed to produce a sworn affidavit Thursday as the judge had asked on why he felt his trial lawyer, Dean Embry, had deliberately blown the case.

Sears fired Embry, who denies any wrongdoing, after sentencing submissions in April. The editor claims he wanted to call defence witnesses but the lawyer refused.

"Mr. Sears hasn't provided an affidavit on ineffective assistance of counsel," Blouin said. "That needs to be done immediately."

Blouin gave Sears until Aug. 8 to provide the sworn statement. The affidavit, as well as one from Embry, would be crucial in deciding whether to reopen the trial, the judge said.

"I would think, given the allegations against him, that Mr. Embry would want to respond," Blouin said.

"There is no evidence whatsoever on the record to support the claim of ineffective assistance of counsel," prosecutor Robin Flumerfelt said.

Sears, who also failed to provide a list of proposed witnesses, complained about finding experts, saying it's hard to get in touch with academics during August. Sears said he expected to come up with an expert in satire and English.

The judge, who is retiring at the end of the month, was unmoved, saying the proceedings have dragged on long enough. He gave Sears until Aug. 15 to say who he would call to testify, their qualifications, and how their evidence would affect the case.

Sears and St. Germaine were responsible for Your Ward News, a free publication court heard was distributed to more than 300,000 homes and businesses in the Toronto area and available online. The publication consistently portrayed women and Jews in beyond ugly terms.

The Crown wants a total one-year jail term for Sears and six months for St. Germaine.

The case returns to court Aug. 22.