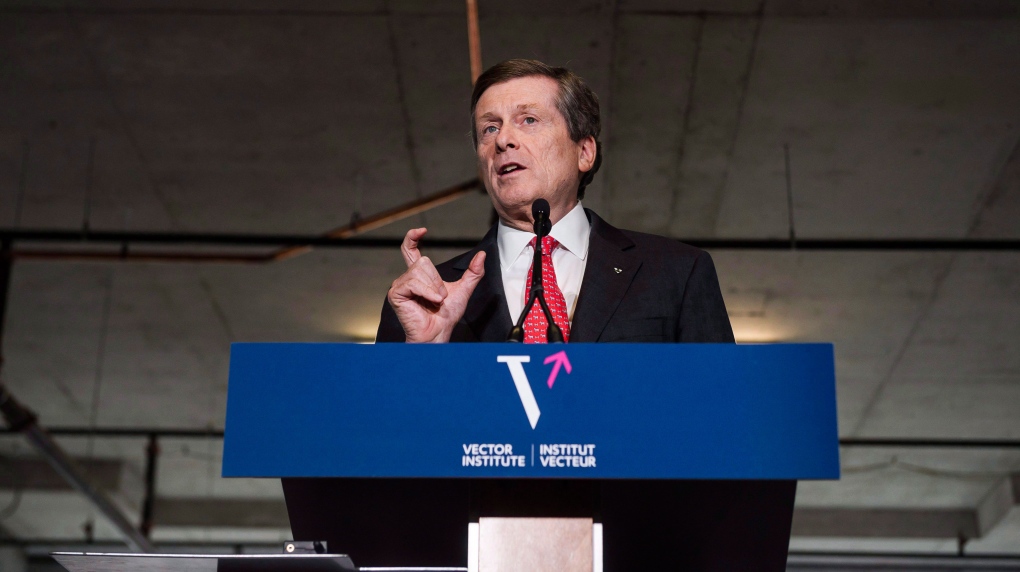 Toronto Mayor John Tory addresses an audience during the opening ceremony of the Vector Institute at the MaRS Discovery District, in Toronto on Thursday, March 30, 2017. THE CANADIAN PRESS/Christopher Katsarov

John Tory would easily defeat Doug Ford in a head-to-head race for mayor but his lead will shrink considerably if a progressive candidate enters the race, a new poll has found.

The Mainstreet Research poll found that Tory has the support of 66 per cent of decided voters compared to 34 per cent for Ford, in a scenario in which there are no other candidates.

The race, however, gets a lot tighter in the event that a third candidate enters the race.

The poll found that if left-of-centre city councillor Mike Layton were to run, Tory’s lead would shrink to nine points with the mayor having the support of 35 per cent of decided voters compared to 28 per cent for Ford and 26 per cent for Layton.

The entrance of a lesser-known candidate, such as outgoing chief planner Jennifer Keesmaat, would also make things more challenging for Tory.

While Tory would still have the support of 54 per cent of decided voters in that scenario compared to 37 per cent for Ford and 9 per cent for Keesmaat, the poll found that the number of undecided voters would shoot up, rising from 15 and 11 per cent in the other scenarios to 28 per cent.

“John Tory has nothing to fear from a one-on-one match-up against Doug Ford but things get much more interesting if there’s a strong progressive candidate in the race,” Mainstreet Research President Quito Maggi said in a press release. “Ford and Tory both definitely have bases of support but there are also many Torontonians out there who could be convinced to vote for someone else. The question is who will put their name forward and will they have the resources and vision to connect with Torontonians.”

In a one-on-one race with Ford, Tory would enjoy the support of 72 per cent of downtown residents and would even be competitive in the so-called heart of “Ford Nation” in Etobicoke, where he would have 44 per cent of the vote compared to 45 per cent for Ford.

With Layton in the race, Tory’s lead in the downtown would shrink to 43 per cent as Layton would grab 36 per cent of the vote in the core. Doug Ford would also benefit from a Layton candidacy in Etobicoke, where his lead over the mayor would increase by one point to 18 points.

“It’s clear that if both Layton and Ford were to run that Tory would be in trouble - at least initially,” Maggi said. “None of us can guess how a mayoral campaign might turn out and what missteps the candidates could make.

The Mainstreet Research poll of 1,000 residents was conducted the day before and the day after Ford announced his candidacy and is considered accurate to within 3.1 percentage points, 19 times out of 20.

The October 22, 2018 election is still 18 months away and candidates won’t be able to formally register until May 1. Previously, candidates could register as of Jan. 1.