TORONTO -- A very sombre group of people gathered outside the Church of the Holy Trinity in downtown Toronto Tuesday afternoon to add the 1000th name to Toronto’s Homeless Memorial.

“This is the worst day of my career,” veteran street nurse Cathy Crowe said, speaking to CTV News Toronto.

“We’ve been doing the memorial here for 20 years. Many of the names on the list are people I know, former patients, so I can’t believe that we’ve had 1,000.”

Ten names were added to the memorial Tuesday, including that of Byron Cromarty, who was just 29 years old.

“Byron died on New Year’s Day. He died right here of an overdose at 1:45 a.m. in the midst of people spending money like water, celebrating the New Year,” Diana McNally, who works at the non-profit organization The Meeting Place, said.

“It’s hard to hear something like that,” McNally added.

With their loved ones in mind, the mourners banded together, silently marching to City Hall with a petition bearing 25,000 signatures. 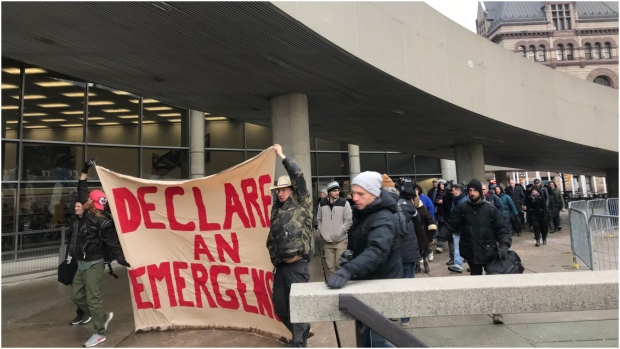 Created by the advocacy group “Shelter and Housing Justice Network,” the petition calls on Toronto Mayor John Tory to declare an emergency on homelessness.

When they arrived at City Hall with their petition, however, the mayor was unavailable. An advisor to the mayor received the document instead.

“We really want him to get a task force together to build 2,000 more beds, to lobby the federal government for extra funds so we can have more shelter beds, and have more rent-geared to income housing,” said the Shelter and Housing Justice Network’s Greg Cook.

Beyond that, front-line workers said they want to create a “building team,” which would involve all three levels of government, to identify vacant city-owned buildings that could be used to shelter the people living in poverty.

After handing in their petition, they staged a “die-in” in front of the mayor’s office. About 75 people lay down along the hallway as the names of all 1000 people who died in homelessness were read aloud. The mayor’s communications director, Don Peat, issued a statement Tuesday afternoon in which he acknowledged the issue.

“The mayor and city council absolutely recognize that homelessness in Toronto is an ongoing critical and emergency issue that requires the provincial and federal governments to commit on an expedited basis.”

The statement goes on to say the city has “significantly expanded” its shelter investments, having opened six new services this winter. It also says the city has created 3,000 new beds since 2015, bringing the total number to more than 7,000.