The Muslim community in Scarborough is reeling after two people were arrested on the grounds of a Scarborough, Ont., mosque, accused of attempting to break into the building and threatening to shoot and blow up the people inside.

Police officers watched over the nightly prayers at the Islamic Institute of Toronto Tuesday evening as community members came together to support each other after the incident, which comes on the heels of the murder of four Muslim people in London, Ont., an attack that police say was an act of hate.

“Community members have been calling and texting all day today because they are very concerned and very much afraid, and we have tried to reassure them,” said Farhad Khadim, the director of education at the institute.

Pictures taken shortly after the arrest show three officers holding a person against a police vehicle during the arrest. A video shows two people taken into a police van without incident. 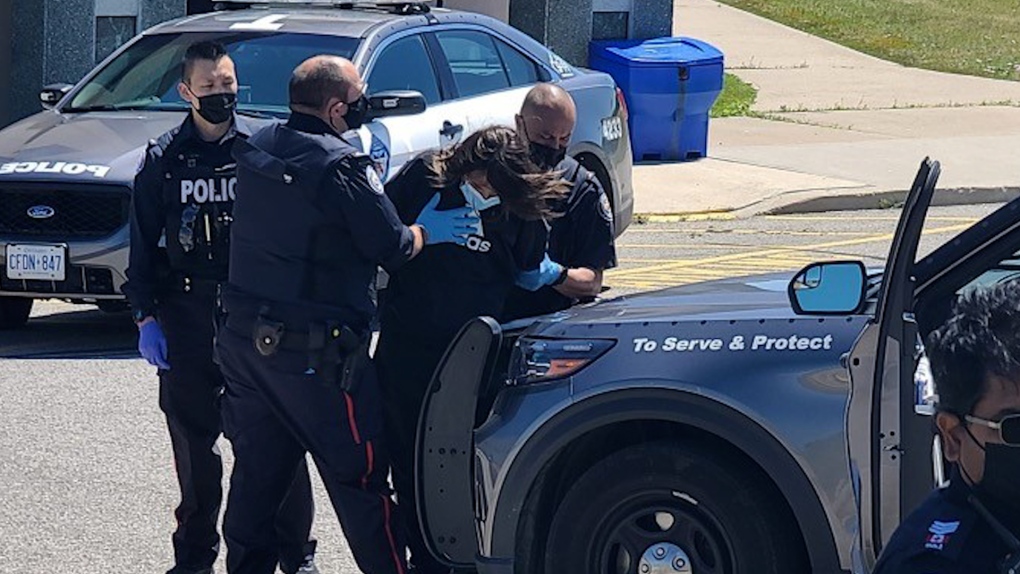 Police arrest a suspect after two people allegedly threatened to shoot and blow up the Islamic Institute of Toronto.

Police say they got a call to the Islamic institute near Finch Avenue East and Neilson Road shortly before noon. They said two people under the influence of illicit drugs tried to gain entry to the mosque, and became aggressive when confronted.

A 24-year-old man and 22-year-old woman are charged with break-and-enter, threatening death and mischief to property endangering life.

“While there is no evidence to suggest this is hate motivated at this time, out of an abundance of caution, our Hate Crime Unit has been notified and will support the ongoing investigation,” Toronto police said in a statement.

No injuries were reported in connection with the incident and police said the suspects had no weapons or explosives on them.

“They threatened to detonate the building and they threatened to shoot individuals,” said Fareed Amin, the chair of the board of directors for the Islamic Institute of Toronto. “There were no names mentioned, but my understanding is there was a threat to shoot people.”

He said the security gates to the parking lot had been left open because of a delivery. He said a handful of people were inside at the time of the incident.

“These individuals obviously felt very threatened. I’m sure once this incident was happening they were reliving the memories from London and the incident at the IMO about a year ago,” he said.

In September 2020, a man was stabbed to death outside an Etobicoke mosque in what appeared to be a random attack. On June 6, in London, four members of the Afzaal family were murdered while going for a walk.

In both of those cases, authorities believed the individuals were targeted for their faith. In London, the alleged attacker is facing terror charges.

“I want members of our Muslim community to know that we continue to stand with them and condemn this totally unacceptable and clearly criminal behaviour,” Tory said. “Our work to fight Islamophobia will continue along with all our efforts to ensure no faith community in our city lives in fear.”

Amin said the way forward is through education and supporting each other as a community.