In the summer of 2021, Ontario’s top doctor said the province could achieve herd immunity against COVID-19 when about 90 per cent of the eligible population was fully vaccinated.

More than six months later, about 89 per cent of residents over the age of 12 have received both doses of a vaccine—but with a new variant rapidly spreading through the population, does this matter?

On this week’s episode of Life Unmasked, the team asks a panel of experts about whether herd immunity is still possible and what role natural immunity will play in ending the pandemic.

During the panel, Professor of Immunology with the University of Toronto Tania Watts, Infectious Disease and Infection Control Physician Dr. Alon Vaisman and bio-ethicist Kerry Bowman also discuss whether or not the idea of immunity should be approached from a global perspective rather than a local one.

Herd immunity occurs when a large group of people within a community become immune to a virus, preventing it from spreading. This can happen through vaccination and natural infection. 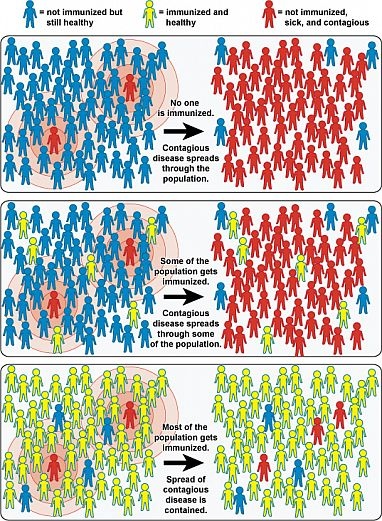 This chart describes how herd immunity works within a community. (https://www.nih.gov/)

When Ontario’s Chief Medical Officer of Health Dr. Kieran Moore said that a 90 per cent vaccination rate in the province could lead to herd immunity in the population, it was met with a resounding optimism. Many people saw this as a possible end to the pandemic and its accompanying economic restrictions.

"Instead of having waves that we're going to have to tolerate, we'll have small outbreaks that we’ll learn to live with," Moore said in August.

"(Those waves) will have a smaller impact on the health-care system and allow us to start to pull away some of the public health measures. That could happen as early as six to eight months from now."

However, those comments were made in relation to the Delta variant, which wasn’t as contagious as the Omicron variant.

International disease experts have since said that herd immunity may be unlikely due to the new variants spreading across the globe. However, they also say that vaccination will make the illness much less severe, meaning that communities should be able to live with it and that, eventually, COVID-19 will become endemic.

Life Unmasked airs first on the iHeart app every Tuesday morning before becoming available on other streaming platforms. If you have questions for the podcast team, or an idea for an episode, please email lifeunmasked@bellmedia.ca.