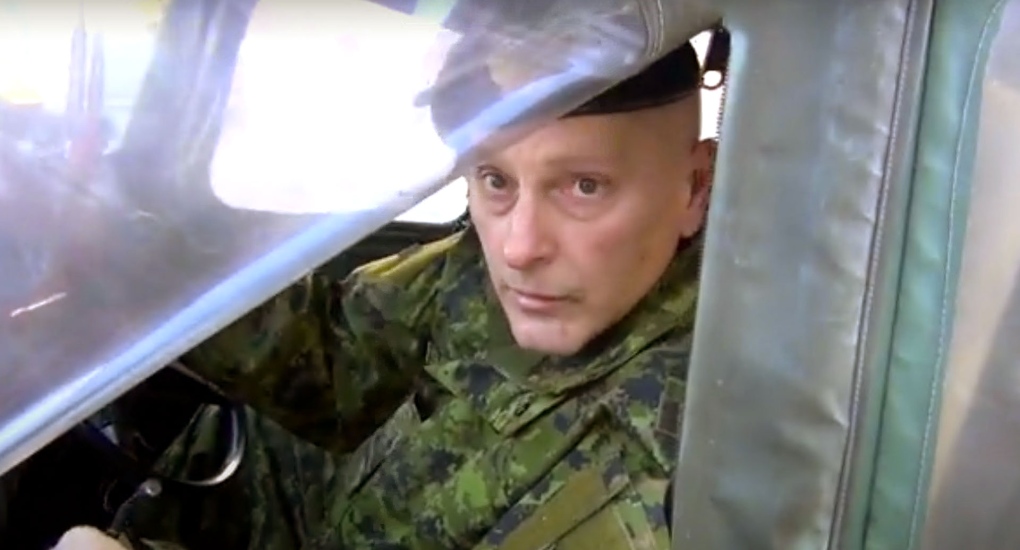 A man identified as Leslie Kenderesi is seen in this screenshot. (YouTube)

TORONTO -- An investigation is underway after a member of the Canadian Armed Forces attended a downtown Toronto protest and spoke out against the military’s plan to distribute COVID-19 vaccines.

A man identified as Leslie Kenderesi was captured on camera standing in front of a crowd at Yonge-Dundas Square on Saturday wearing a military uniform.

In several videos posted online, the man is heard asking those currently serving in the military to “not take this unlawful order in distribution of this vaccine."

The man refers to the vaccine as “killer” and said he calls it this because “nobody knows what this vaccine will do to your body.”

“I’m asking military right now serving, truck drivers, medical, and engineers, whatever you are, do not take this unlawful order in distribution of this vaccine.”

He added he's not sure if he will take the vaccine and noted he will likely get in trouble for his comments.

The comments were made at a protest organized by The Line Canada. The group, according to its website, aims to “resist tyranny and oppression” while “opposing the lockdown and the restrictions imposed on the people and the economy.” The group notes they are not anti-mask and “support your choice to wear a mask.”

The Department of National Defence confirmed to CTV News Toronto on Wednesday that the man seen in the videos is a member of the Cadet Instructors Cadre, which is part of the Cadet Organizations Administration and Training Service. His responsibilities in this role include the supervision, administration and training of cadets.

A spokesperson said the Department of National Defence “takes such situations very seriously” and confirmed an investigation is underway to “ensure the most appropriate action is taken.”

“The individual’s comments are not reflective of views of the government of Canada or Canadian Armed Forces policy,” the spokesperson said. “These actions can include various measures up to and including release from the armed forces.”

On Monday, the military, health workers and government officials conducted a “dry run” of the complex plan to deliver doses across the country.

Maj.-Gen. Dany Fortin, who is leading the military through the vaccine distribution process, said the “dry run” was intended to ensure everyone involved got comfortable with the intense requirements of handling a vaccine that must be kept below -70 C at all times.