A baby monkey who caused a stir after he was found wandering alone in an Ikea parking lot Sunday has been transferred to his new home, a primate sanctuary north of Toronto.

Five-month-old Darwin was moved to the Story Book Farm Primate Sanctuary in Sunderland Monday afternoon, a day after he was spotted on his own at the furniture store’s upper-level parking lot clad in a shearling coat and diaper.

Police were called to the store around 2:30 p.m., and a short time later, the monkey’s owners surrendered him to city authorities. They were charged $240 for keeping a prohibited animal.

She described the monkey as sensitive and uncomfortable around people.

“He’s been separated from his owner unfortunately, so we’re being recognizant of that and making sure he gets out to a place where they can care for him properly,” Leiher said.

The Animal Services was concerned he may carry Herpes B, which is found in his species type and can be transmitted to humans.

Though Leiher called the monkey discovery “an unusual occurrence,” she said Animal Services is aware people in the city keep prohibited animals such as venomous snakes.  There is a reason the bylaw prohibiting certain types of animals is in place, she said.

He’s a wild animal not a domestic pet, Leiher said, but due to his young age he must now be cared for in a sanctuary setting.

Leiher said she did not know if the owners were aware that keeping the monkey was illegal. She said they were co-operative in signing over ownership of the monkey.

The monkey was being kept in a crate in a parked car on Sunday, and he somehow got out of the vehicle and took off.

News of the wandering monkey went viral on social media services, including Twitter.  A few hours later, what has become known as the IKEA Monkey was making international headlines.

More photos and videos of the monkey were surfacing Monday from curious onlookers who were surprised to see the coat-clad primate at the busy furniture store. 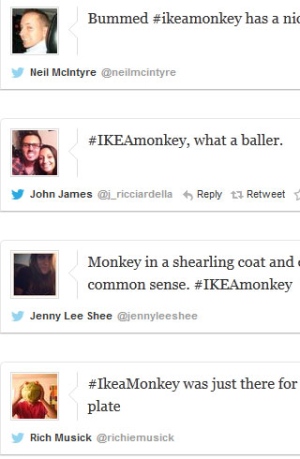