If you want to reach Rogers, don't tweet this guy 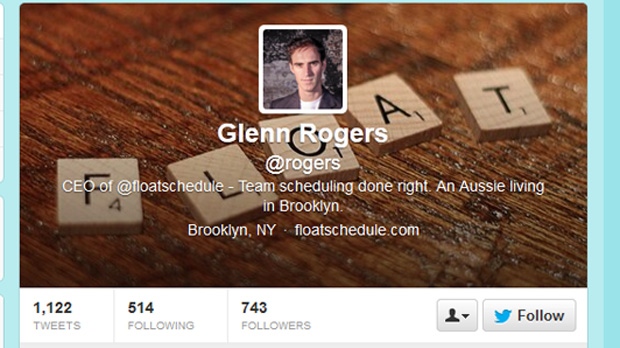 The Twitter page for Glenn Rogers is pictured in this screen grab from Wednesday, October, 10, 2013.

As thousands of Rogers Wireless customers across the country grapple with a massive service outage preventing them from making phone calls, the technical outage is hurting the phone of at least one bystander south of the border as well.

His name is Glen Rogers. And his twitter handle is @Rogers.

"My phone could die," he says, speaking to cp24.com from his home in Brooklyn, New York. "It’s been really hammered tonight."

That’s because since the Rogers Wireless outage began around 7 p.m. Wednesday evening, Rogers – that is Glen Rogers – has been inundated with hundreds of messages on Twitter from angry customers mistaking his Twitter handle for that of Rogers Communications.

"This isn’t the first time," he says. "My phone won’t stop vibrating and you know pretty quickly what’s gone down."

He typically experiences a bombardment of tweets from Rogers customers every few months, but this one is the worst one so far, he says.

"There’s a lot of abuse,” Rogers says. “It’s amazing what people will say to a company as opposed to an actual person. They’ll often say something and then be very apologetic when they find out there’s a person on the other side."

But Rogers – an easy-going native of Melbourne, Australia –looks upon the whole thing with an air of bemusement.

"It’s amazing how quick (customers) are to react when (they) lose their Internet and how angry they are when they lose their telecommunications," he says.

While there are plenty of people eager to jump in with outraged messages when their service is interrupted, Rogers says there are also lots of people who come to his defence online to correct the mistake made by others.

"I get a lot of people coming to my defence saying leave this guy alone… It’s kind of nice to have some supporters out there," he says.

Having signed up for Twitter in its early days, Rogers says he forgot about his account for a while, but soon realized its value when Twitter picked up steam and the misdirected messages started pouring in.

And while his high-profile Twitter handle means that his phone occasionally trembles with consumer rage, Rogers says he’s not interested in changing it.

Besides, Rogers Communications doesn’t seem particularly interested. Rogers says the company approached him several years ago to see if he’d be interested in donating his Twitter handle to them.

"I was a little shocked that that was their offer and I haven’t heard from them since," he says.

Despite the occasional barrage of furious tweets, Rogers says he’s not bitter and his opinion of Canadians is undiminished.

"I don’t hold anything against Canadians. I think they’re a lovely bunch. Very nice people," he says.

And while he doesn’t have too many harsh words for Rogers either, he does have one request:

"I hope they fix their service soon," he says.