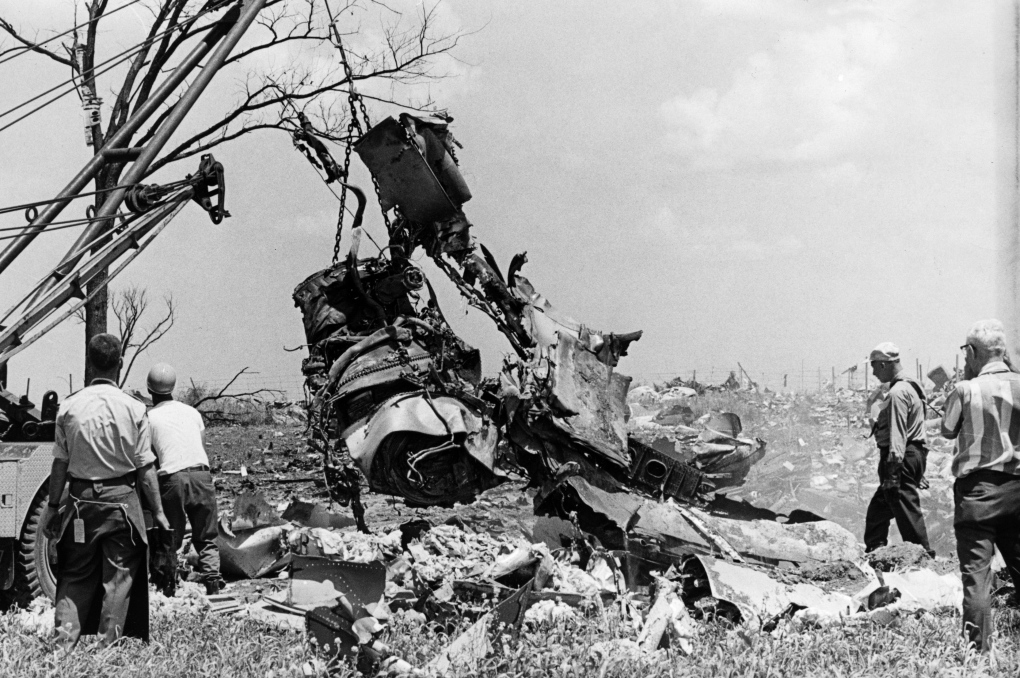 FILE--Investigators, in an attempt to determine the cause of a DC-8 crash, haul one of the engines from the main crater during cleanup on July 7, 1970. (THE CANADIAN PRESS / STF)

TORONTO -- A memorial garden dedication takes place Sunday at the site of one of Canada's worst aviation disasters, a former farm field that for decades continued to yield bits of human remains and wreckage.

For some, like Lynne Genova who was in bed a few kilometres from where Air Canada Flight 621 slammed into the ground, the permanent memorial with its 109 stones has finally brought her a sense of long-lost peace.

"It haunted me because I thought that houses would be built on it and nobody would know," Genova says.

"I'm at peace now because I know it's marked appropriately and respectfully."

It was around 8 a.m. on Sunday, July 5, 1970, when the DC-8 en route from Montreal to Los Angeles prepared to make a routine stop at Toronto's international airport just northwest of the city.

Just as it came in to land, co-pilot Donald Rowland mistakenly deployed the ground spoilers, which are only to be used after landing to brake the aircraft. The plane dropped.

The captain, Peter Hamilton, 49, applied full power, but the plane bounced sickeningly hard on the runway, breaking off one of the engines. Unaware of the extent of the damage, Hamilton managed to get the "California Galaxy" airborne again so he could attempt another landing.

As the plane climbed, leaking fuel ignited. A series of explosions destroyed the right wing. The DC-8, trailing fire and smoke, nose-dived into the field from about 1,000 metres up about 10 kilometres from the airport.

All 100 passengers and nine crew were killed.

Among the passengers were Canadians -- including a mom and her two girls -- American vacationers, and others from overseas.

About 50 metres away, the impact shattered the windows of a farmhouse where the Burgsma family of 11 was asleep.

"Everything was silent except for a hissing sound coming out of that big hole," Sytze Burgsma said at the time.

A would-be rescuer sent by helicopter would later say they initially missed the crash site because, from the air, they thought it was a garbage dump.

And she remembers the radio broadcast announcing the death toll.

"There was nothing to do. I felt hopeless and helpless that day."

It took until 2000 before Genova finally brought herself to visit the actual site, and another five years before newspaper stories about its neglect prompted her and others to begin agitating for the memorial site.

In 2008, as farmers sold their land and the surrounding area developed rapidly in what is now Brampton, the idea of constructing a permanent memorial finally took shape.

Diarmuid Horgan, president of Candevcon, who has acted as the developers' co-ordinator for the memorial site, said he was a little surprised by how few Canadians are aware of the disaster, even if it did happen so many years ago.

"It didn't seem to register in the same way as things happen today," Horgan said.

"The dedication ceremony will now hopefully provide some closure to the relatives."

The site, formally designated as a cemetery, has plaques with the names of each of the victims. The 109 stones are grouped randomly. It's peaceful.

"This garden, to me, is appropriate where it is," Genova says.

"We finally encompassed our history."