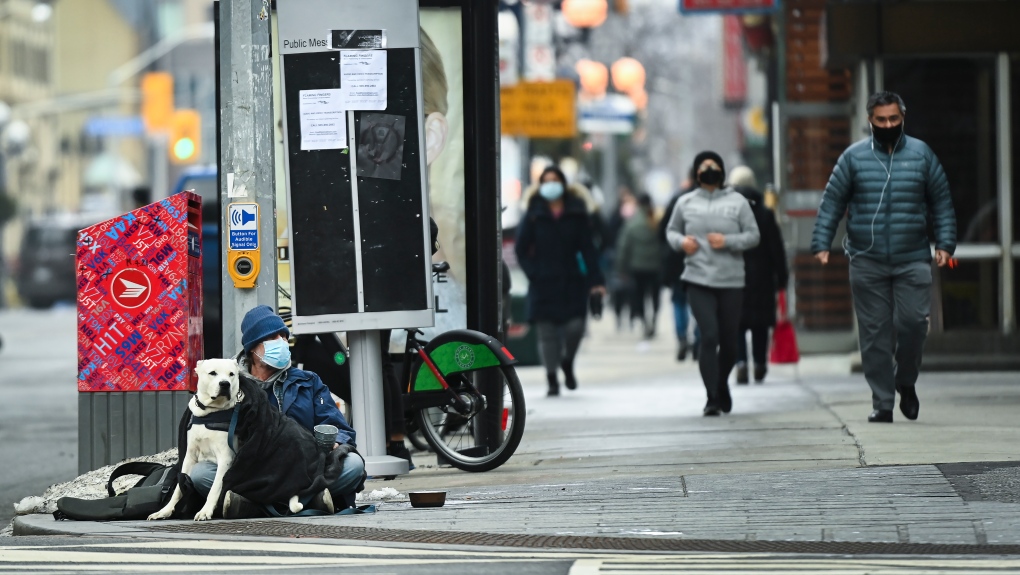 A homeless person wearing a mask sits with his dog as people go about their daily lives during the COVID-19 pandemic in Toronto on Thursday, January 14, 2021. The province of Ontario is currently under an emergency order lockdown. THE CANADIAN PRESS/Nathan Denette

TORONTO -- A pilot project that aimed to vaccinate homeless people in Toronto's shelters has been put on hold due to a vaccine shortage, local officials said Wednesday.

The rollout of the vaccine to the city's 100 shelters was paused because of a shortage of the vaccine from Pfizer-BioNTech, which announced last week it would delay the delivery of the COVID-19 vaccines to Canada due to production issues.

Dr. Stephen Hwang of St. Michael's Hospital, which is helping run the project with the city and several other organizations, said 55 residents and 30 staff at Scarborough Village Residence, a city-run shelter in the east end, got their first dose on Friday.

"It was, overall, a resounding success," said Hwang, a physician and research scientist who works with the homeless.

"We're pleased that it's actually rolling out because it really should be a high priority to get people who are experiencing homelessness vaccinated."

He said a small number of residents refused the vaccine.

"It's something that we do have to work on and certainly for people experiencing homelessness a degree of skepticism or mistrust of the health-care system is probably a bit higher than in the general population," Hwang said.

Vaccinations at a shelter for Indigenous men was also paused as was the plan to vaccinate those living at the downtown Strathcona Hotel, where many of the city's homeless moved to after living in encampments much of the year.

Hwang said he was hopeful the vaccines would only be delayed by a few weeks.

He said the team, which includes the Inner City Health Associates, a group of 100 physicians who work at shelters and drop-ins across the city, would analyze the progress of the pilot and fine-tune it before it's rolled out to the rest of the shelters.

"The goal is to develop a playbook so that we can have a plan that we can go out to immunize people in shelters across the city," he said.

Mary-Anne Bedard, the city's general manager of shelter, support and housing administration, said tracking people in shelters will be key to ensure residents receive their second dose of the vaccine.

While there may be some hesitancy toward the vaccine among the homeless, Bedard said early results show it's not a pervasive problem.

"From all the discussions we've had, there's a very eager population in shelters, both staff and clients, who are interested in getting the vaccine," Bedard said.

She said the city is also working on a plan with St. Michael's Hospital and the Inner City Health Associates to vaccinate the hundreds who've left shelters for the streets and the encampments that have sprouted up across Toronto since the pandemic began last year.

Hwang said the encampments have proven rather safe in terms of contracting COVID-19.

"Given what we know, data suggests that the highest risk is in shelters rather than encampments, so it actually makes it very reasonable to try to get well underway in the shelters," he said.

There are currently 40 people who have tested positive for COVID-19 in shelters, according to the city's data. Of the 20,000 people who used the system last year, 711 contracted the disease -- and six died of the virus.

The city has set up a recovery centre for those with COVID-19. Bedard said 130 staffers working there have been recently vaccinated against the disease.