Toronto Mayor John Tory sat down with a local cycling advocacy group Wednesday in an effort to diffuse tensions between cyclists and police in High Park.

In recent weeks, tensions have risen between the two groups – with cyclists claiming Toronto Police Services (TPS) is participating in an unfair “enforcement blitz” against speeding bikers, and police claiming their presence in the park is to ensure everyone’s safety.

A cycling protest is set to take place at the park, beginning at 6 p.m. Thursday.

On Wednesday, Cycle Toronto issued a news release stating they met with the mayor to “discuss evidence-based policy and design solutions.”

In the past, Tory has said police don’t deserve to be criticized for enforcing the speed limit on cyclists, but Cycling Toronto said on Wednesday the mayor “expressed willingness to consider implementing … solutions in the park before the end of 2022, [and that] he also expressed consideration of a car-free pilot [seven] days a week.”

In the short-term, the organization wants to see the following implemented:

On Thursday, Toronto police issued a statement saying officers are attending the park after having received complaints from the community “about aggressive driving and unsafe cycling habits in and around High Park.”

“While we will always prioritize traffic safety, including cyclists’ safety, the Service is not engaged in an enforcement blitz specifically targeting cyclists,” a spokesperson for the force said.

“Our focus has largely been on public safety, education and cautions to both cyclists and motorists. That said, we take community complaints seriously and where officers see cycling behaviour that risks public safety, they have the discretion to lay charges and have done so, when necessary.”

In a news release issued Friday, police said that between January 2021 and Aug. 10 2022, just 16 traffic tickets had been issued to cyclists in and around High Park.

Just over 1,200 traffic tickets were handed out to motorists in the same area.

"Tickets have been issued to cyclists for offences including failing to stop at stop signs and red lights, unsafe movement on lane or shoulder, and failing to wear a helmet on a motor assisted vehicle," police said in the release.

"Overall, this is a very small part of the traffic enforcement that occurs in the city each day. Our presence in High Park, like in any other city park, is intended to enhance the safety of everyone using these shared spaces, including motorists, cyclists, and pedestrians." 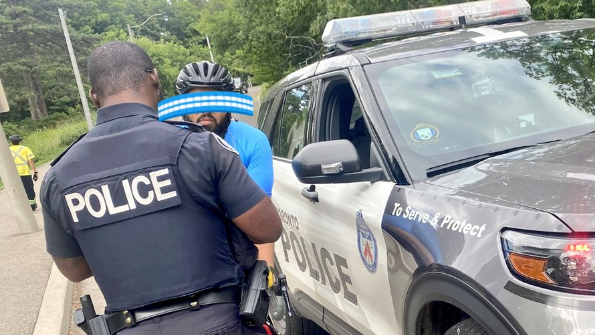 A Toronto cyclist was hit with a speeding ticket after going 6 km/h over the limit in Toronto's High Park, a lawyer says. (@TheBikingLawyer)

Toronto biking lawyer David Shellnutt told CTV News Toronto he takes issue with TPS’ selectiveness when it comes to enforcing the rules of the road.

“Despite uncontradicted data that motorists on the streets of Toronto cause infinitely more and disproportionate harm to people walking, people riding bikes and other vulnerable road users, Toronto Police with the backing of Mayor Tory have descended on High Park, ticketing, harassing, and targeting people on bikes,” he said in a statement provided Wednesday.

He says, while a solution is needed for when pedestrians and drivers are in conflict, it won’t come from over-policing.

“What has become clear is that over-policing, which disproportionately targets racialized and vulnerable residents, is counterproductive to public safety and does not effectively address the legitimate issues brought forward by the community.”

Instead, he’s calling on the city to implement infrastructure changes that will reduce danger and conflict between park users, implement dedicated morning and evening hours for higher speed cycling training, end and review TPS’ targeting of cyclists for minor HTA infractions and refocus city-wide traffic safety enforcement around dangerous driving, among other requests.

According to publicly available Toronto police data, between 2006 and 2020 there have been 16 incidents of cyclists striking pedestrians in which a serious or fatal injury was reported. None of those incidents were in High Park.

With files from Chris Herhalt, Chris Fox and Katherine DeClerq.