TORONTO -- A 71-year-old devoted Toronto Maple Leafs fan who is dying of cancer said she was stunned to learn that her friends and family had begun a campaign that would hopefully see her meet her favourite player—Auston Matthews.

Donna Thomson was diagnosed with Stage 4 lung cancer in September 2019 and often spends weekdays with her younger sister and neighbours in Trenton, Ont. watching the Toronto Maple Leafs.

“There is no one better to watch hockey with,” said 33-year-old Grant Joseph Haire, a neighbour who started the campaign. “She has a bell that she keeps with her and every time the Leafs score she gets up and rings the bell.”

“She loves the Leafs more than anything.” 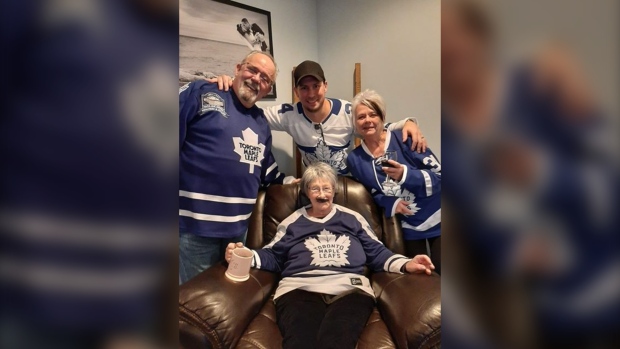 Haire moved to Trenton around the same time that Thomson’s sister did three years ago, and the families often get together to watch the games. He said that when Thomson was diagnosed with cancer, he wanted to try and unite her with her hero.

“I truly feel she deserves something really special and if I can help her have that, then I will do whatever it takes to make it happen,” he said. “She is such a happy and incredible person and even amidst all of things she stays her happy, positive and eccentric self.”

Haire said he has called the Maple Leaf Sports and Entertainment Foundation and has explored a number of other avenues to try and make the connection, including turning to social media. In a post to Facebook on Dec. 30, he pleads with the public to “help make a New Years miracle come true for this beautiful woman.”

Attached to the post are two photographs of Thomson, who is wearing a Maple Leafs jersey, a fake mustache and is holding a large cowbell.

Thomson did not know that her friend had started the campaign. When she found out on Thursday, she said she was “stunned.”

“When they told me, my mouth fell open. He’s my hero, what can I say,” she told CTV News Toronto over the phone.

Thomson said that even if she does meet Matthews—of which she knows there is no guarantee—she doesn’t know what she would say.

“It would just be very exciting,” she said. “I would probably be tongue tied.” 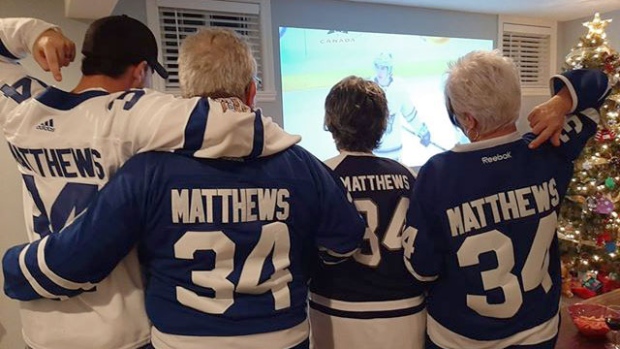 When asked why Matthews was her favourite player, Thomson cited a number of reasons.

Thomson stays with her sister most weeknights and the pair say they check to see if there is a hockey game on television before they make any other plans. Thomson said that she enjoys watching the games at home because she can see Matthews much closer on the big screen.

“She is funny, she’s like a commentator with the game,” her sister, Debbie Bergeron, said. “It’s just too funny the way she carries on.”

Haire said that Thomson does not want to know how much time she has left because “she says it will kill her personality.”

“We don’t know when she is going to go, we watch every game together.”

“We make sure not to miss any now.”