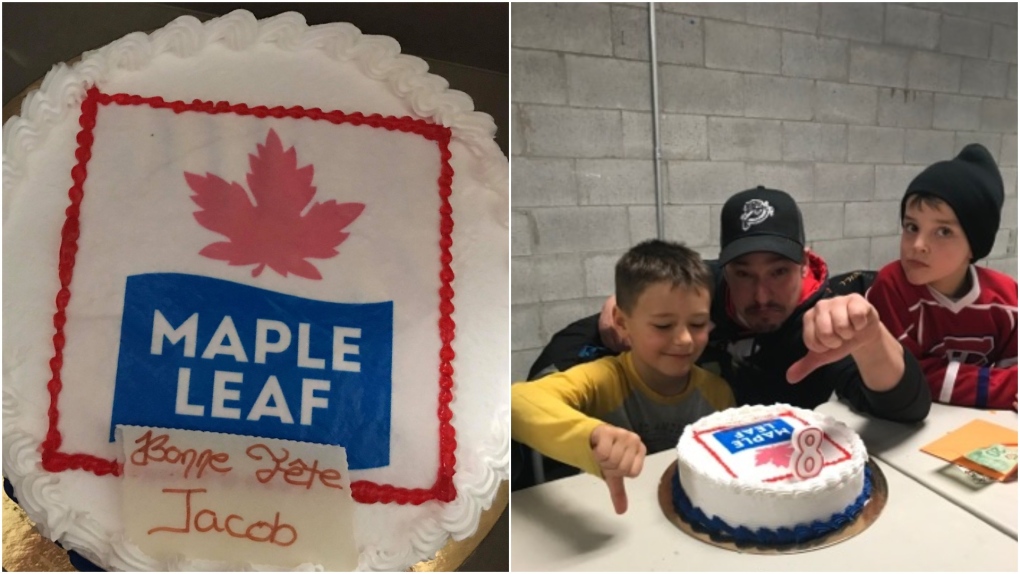 Jacob Bertrand and his father Mathieu give a thumbs down to the eight-year-old's birthday cake which was supposed to feature the Toronto Maple Leafs' logo. (Tania Lévesque)

Jacob Bertrand’s step-mother said the confusion started when his father, Mathieu Bertrand, travelled to a bakery to place the order on Dec. 31.

“I’ve been ordering the same cake for three years,” Tania Lévesque told CTV News Toronto Monday. So she said she was surprised when Mathieu Bertrand told her the bakery didn’t have the Toronto Maple Leafs’ logo.

“Well we have the [Montreal] Canadiens logo,” the bakery told Mathieu Bertrand, which was a far-cry from his son’s beloved Leafs. 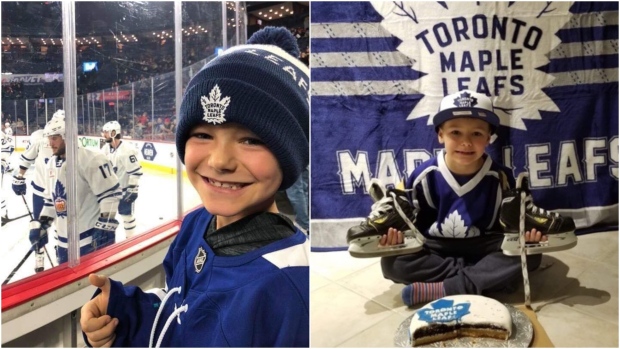 The bakery, which Lévesque has decided not to name, then suggested they return to the bakery with an image of the Leafs’ logo.

Frustrated, Lévesque asked the bakery to simply Google the image ahead of the pick-up scheduled for Jan. 4, the day of the birthday party.

“We went to pick up the cake. We opened the box and just laughed,” Lévesque said.

Lévesque described that the cake had been incorrectly topped with the logo for Maple Leaf Foods, a packaged meats company, instead of the Toronto hockey team.

With no time to spare before the birthday party, the couple made their way to the venue, a Montreal hockey arena, with the deli meats-themed cake in tow.

“All the parents just laughed,” Lévesque said when she opened the cake for the party guests.

She said that the children in attendance were confused by the design, but enjoyed the cake nonetheless. However, it was a different story for young Jacob.

“He didn’t even take a bite,” Lévesque said.

The bitter-sweet celebration came to an end with Jacob and his father taking a picture with the cake in question, both flashing a thumbs-down sign to show their displeasure with the confusing confection. The 8-year-old can be seen grinning, though, despite the mix-up.

Maple Leaf Foods have sinced responded to the story on Twitter.

In a tweet, the company said that they were "sorry" to see that Jacob was dissapointed with his cake, but have promised to give him something that will turn his "thumbs UP!"

"We're sending Jacob and his family to a Maple Leafs game and we're going to fuel them with delicious Maple Leaf procuts," the tweet reads.

Jacob said that the gesture definitely makes up for the mix-up.