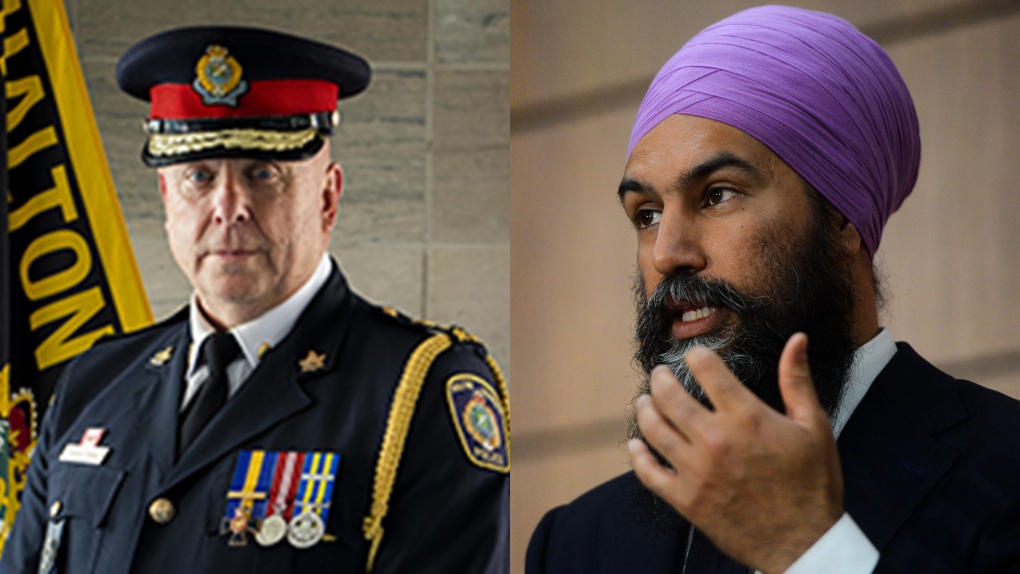 TORONTO -- Halton Region’s chief of police criticized federal NDP leader Jagmeet Singh on Twitter, saying Singh’s suggestion that the man who allegedly broke into the Rideau Hall grounds carrying four guns may not have survived if he was not white.

Chief Tanner called Singh’s suggestion that the RCMP would have handled the July 2 situation differently if the suspect was not white “politics at an all-time low.”

Ohhhh Mr Singh ⁦@theJagmeetSingh⁩ ⁦@NDP⁩ really? A situation safely resolved and you choose to somehow make it an issue about racism? I suppose you openly believe the accused should have been killed by the Rcmp then.Politics at an all time low https://t.co/MG570OylDO

He was able to walk for 13 minutes before he was confronted by RCMP officers who surrounded him and took him into custody without incident after about 90 minutes of discussion.

When asked Wednesday if he thought the situation would not have ended peacefully if Hurren was not white, Singh said “yes.”

“That contrast - someone showed up to potentially kill the prime minister of Canada, or with weapons at his residence, and that person was arrested without any violence and you had a person who in his own home was killed,” Singh told The Canadian Press on Wednesday. “That to me is what systemic racism in policing is all about, that difference.”

Singh was referring to the deaths of 62-year-old Ejaz Choudry in Mississauga’s Malton area, Regis Korchinski-Paquet in Toronto, Chantel Moore in New Brunswick and Rodney Levi, also of New Brunswick, who were all shot dead or died in interactions with police over the past two and a half months.

All four were not white and were in the throes of severe mental health crises when they encountered police.

Their deaths and previous incidents, including the police shooting death of D’Andre Campbell in Brampton in April, have emboldened an existing major movement across Canada to deal with systemic racism in policing and defund police services, transferring some of those funds to other organizations that deal with mental health.

Tanner said on Twitter he wished Singh would have commended the RCMP for its handling of the Rideau Hall situation.

Agreed. Making a point. This is Twitter. He’s a political leader. He could also have commended the RCMP officers involved and say that he wished all instances were more like this one.

He also referred to a July 8 incident in Oakville where police arrested a barricaded male teen armed with a knife after a standoff, suggesting the fact the teen was not injured in the encounter meant the incident would “never make the front page.”

The Halton Regional Police Service said Thursday that Tanner’s comments were his own.

“We will let the Chief’s comment speak for itself. We will not be providing any further comment,” Const. Steve Elms told CP24.